In 1968, the newly appointed Director of Allied Health at the Bowman Gray School of Medicine, (now Wake Forest University School of Medicine), Dr. Leland Powers proposed to establish a Pediatric Assistant training program at Bowman Gray. The program would require two years of Liberal Arts college education prior to enrollment and consist of a didactic year of study, followed by a year of clinical preceptorships. The program would be supported by a US Public Health grant and was similar to the pediatric training program at the University of Colorado under the direction of Dr. Henry Silver.   Dr. Anderson, a Pediatrician in the Medical School, friend of Dr. Silver and colleague of Dr. Powers, was asked to help develop the curriculum and become the Medical Director of the new program.  By the time the program accepted its first eight students in 1969, the curriculum was broadened to educate Physician Assistants for generalists and not just pediatricians.

Dr. Anderson was Medical Director in the PA Program at Bowman Gray, until her retirement in 1976. In the early 1970s, Anderson served as a member of the National Board of Medical Examiners’ Committee to develop the first national certification examination for physician assistants.  She also co-authored Introduction to Medical Sciences for Clinical Practice: A Self-Instructional/Tutorial Curriculum which was published in 1976 and used by several developing PA Programs. Anderson remained the PA program director at Wake Forest University from 1969 to her retirement in 1976.

Anderson was born in Union Springs, Alabama.  She graduated from Cornell University and completed a residency there in pediatrics.  She moved to Winston-Salem, NC in 1945 to establish her own private pediatric practice.  She joined the Bowman Gray School of Medicine on a part-time basis for 25 years and in 1968 was appointed to full-time Associate Professor of Pediatrics. During this time, Anderson directed the outpatient services for the Department of Pediatrics.  For thirty-three years she taught medical students, residents and physician assistant students.  She was adored by her students, her patients and faculty colleagues.

Anderson was a fellow of the American Academy of Pediatrics, a member of both the Ambulatory Pediatric Association and the North Carolina Pediatric Society.  She was president of the Forsyth County Medical Society (1968-1969), the first woman to hold this position.  She was a champion for public and rehabilitative health care and an advocate for children’s rights for physical, mental, emotional and social health.  As noted by one of her professional colleagues, “she left a legacy of sanity, a sense of proportion and a willingness to rethink old beliefs and prejudices.”

The PA Student Society at Wake Forrest University is named in her honor and the Katherine H. Anderson Award, established in 1988, is given to a first-year student in recognition of exemplary academic performance and professional growth toward becoming a physician assistant during the pre-clinical year.

Acknowledgments:This Biography was prepared by Reginald Carter with the assistance of Catherine Shull and Nancy Dennis and submitted to the PA History Society in July 2019. The photographs are courtesy of the Wake Forest School of Medicine, Coy C. Carpenter Library, Dorothy Carpenter Medical Archives, Winston-Salem, NC.

References Used: The primary information for this Biography is from a memorial that appeared in the NC Medical Journal in 1979 at http://archives.hsl.unc.edu/nchh/nchh-17/nchh-17-040.pdf, from Digital Forthsyth (NC County, location of Winston-Salem, home of Wake Forest University) at http://www.digitalforsyth.org/photos/7813 and from Clinical Insights in Pediatrics, The Pediatric Assistant, 1968 at https://medspace.mc.duke.edu/concern/documents/8s45q8873?locale=en. 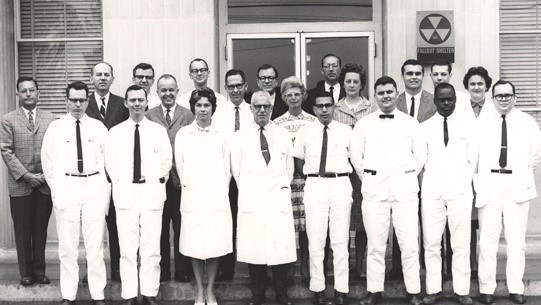 Department of Pediatrics, Bowman Gray School of Medicine, mid 1960s or early 1970s. Katherine Anderson is in the center of the second row.