Terry M. Arthur, PA-C (1946- ), is a physician assistant at Tift Regional Heart and Vascular Center in Tifton, GA. He was the first PA in Tifton, GA, and one of the founding board members of the Georgia Association of Physician Assistants.

Mr. Arthur began his medical career during the Vietnam War. He served as a Medical Corpsman in the USAF during the War serving in a Casualty Staging Unit at Tachikawa AFB in Japan, taking care of the wounded. He studied pre-med at Central State College in Edmond, OK, 1969-1971, with the intention of going to medical school to become a physician. However, he read an article in Life Magazine about the MEDEX program in Washington and the PA program at Duke. It discussed the fact about ex-medical corpsman being trained for the role — he knew right then that was the career path for him. Mr. Arthur left the pre-med program in 1971 to pursue the PA profession; he and his family packed up and moved to Durham, NC after an interview at Duke assured him he would get in. As it turned out, he was not accepted that year after all and was told he would have to wait another year. Mr. Arthur had heard about the PA Program at the University of Alabama in Birmingham, AL, and, determined to begin his physician assistant career, he decided to apply there. He interviewed with Kay Andreoli, DSN, FAAN, who trained the original PAs at Duke. Mr. Arthur was accepted into the PA program in 1971. He and his family relocated again, and he graduated from the University of Alabama at Birmingham in 1973, along with approximately 30 other PA students.

Immediately following PA school, Mr. Arthur joined the Tifton Medical Clinic (now known as the Affinity Health Group) in Tifton, GA as a physician assistant. At the time, he was the first and only PA in this small town of Georgia, and his integration onto the medical care team did not happen overnight. No one, including most doctors, nurses and patients had ever heard of a PA, and Mr. Arthur assumed the difficult task of introducing the PA profession to his clinic and to his town. Each procedure performed was a new opportunity to establish himself as a competent medical provider and earn the trust of the other staff members and patients.

Mr. Arthur’s responsibilities as a PA earlier on in his career certainly differed from those later on in his career, and that is in part contributed to the fact that the doctors were not completely convinced of his abilities; he performed simple procedures, such as taking patients’ histories. Over time, his role in patient care expanded into treating ER patients and making rounds and performing numerous procedures including bone marrow aspirations and biopsies, lumbar punctures, thoracentesis, Swan-Ganz catheter placement, central lines placement and many others. Still, despite successful efforts to prove himself, he was still met with resistance from some of the medical staff. Although it was a slow journey in the beginning gaining respect from his coworkers, Mr. Arthur was not discouraged, and his hard work, persistence and belief in his own abilities paid off; eventually, the other medical staff began to trust him. He became well known in the community. Tifton, GA was now positively acclimated with physician assistants. Over the next few years, the clinic hired more PAs, and they, too, flourished. Today, Mr. Arthur says, there are so many PAs in Tifton that he does not know all of their names or even how many there are (personal communication, April 14, 2012). Mr. Arthur continued treating patients in general internal medicine at the Affinity Health Group clinic for over three decades until 2007, when he transferred to the Tift Regional Heart and Vascular Center.

In 1975, Mr. Arthur was invited by Carbon Stewart, PA-C, who later became the first vice president and second president of GAPA, to travel to Atlanta, GA to participate in the establishment of the Georgia Association of Physician Assistants. The name “GAPA” is credited to Mr. Arthur. He shared with us in an interview that while the group was trying to come up with a name for the organization, he blurted out “GAPA,” which has remained ever since (personal communication, April 14, 2012). Mr. Arthur served on the GAPA Board of Directors for its first year in 1975.

Mr. Arthur’s career also includes serving in the Georgia Army National Guard, in which he was one of only three PAs. He served as a Battalion Medical Officer for the 2nd Battalion 121st Infantry (Mechanized) in Albany, GA from 1978-1992 and retired as a Chief Warrant Officer 3.  His role involved treating patients at Aid Stations. He was called back to active duty during Operation Desert Storm and had to leave his family for desert training at Ft. Irwin, California. The war ended several months later, and he officially retired from the National Guard in 1992.

In one statement, Mr. Arthur illustrates his humility towards and passion for the PA profession: “I have just been a hard working PA for many years with no honors to submit. I have no fancy degrees like some do. I have spent my entire career taking care of patients” (personal communication, April 14, 2012). Whether he was caring for the wounded in the military, or was one of the first PAs in Georgia and overcoming struggles to be accepted as a viable member of the medical profession, Mr. Arthur has held the deepest respect for the PA profession and is proud to have contributed to its history and growth.

Mr. Arthur currently resides in Chula, Georgia. He continues to work at the Tift Regional Heart and Vascular Center and is responsible for supervising and monitoring Cardionuclear Stress Testing.

Acknowledgments: This biography was written by Keri Habegger and Lori Konopka-Sauer, PA History Society, with the assistance of Terry Arthur. It was submitted to the Society in April 2012. All photographs are courtesy of Terry Arthur. 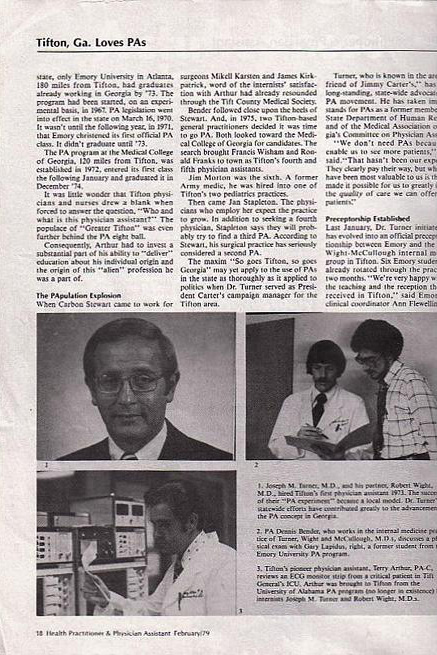 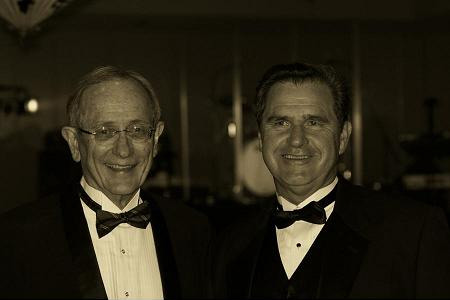