Ruth Ballweg, MPA, PA-C Emeritus (1944 – 2022) was Professor Emeritus at the University of Washington MEDEX Northwest’s Department of Family Medicine, School of Medicine.  She was one of the first formally-trained physician assistants in southern Oregon. In addition, Ms. Ballweg was the editor and contributor to the first American textbook written on PA training, now in its seventh edition and named after her: Ballweg’s Physician Assistant: A Clinical Guide to Practice.

Prior to entering MEDEX as a student, Ms. Ballweg was a childbirth educator, breastfeeding counselor, and medical social worker in Ashland, Oregon. She was a leader in the childbirth education/alternative birthing movement in Oregon and worked with her colleagues to create the first approved hospital-based Alternative Birth Center at Ashland Community Hospital in 1976.

Ms. Ballweg graduated from MEDEX in 1977 and practiced in family medicine in Ashland, OR, as the community’s first PA.

In 1981, Ms. Ballweg returned to MEDEX as a faculty member at a time of great turmoil in the program. In response to national health policy documents predicting an oversupply of physicians (the GMENAC Report), the Washington State Medical Association (a founder of the MEDEX program) had voted internally to “dismantle” MEDEX. Ruth was tasked with identifying strategies to reverse this decision, including the coordination of a health policy conference designed to highlight new roles for physician assistants. That conference served as a model for subsequent conferences focusing on workforce policies to expand the physician assistant workforce. Ms. Ballweg became the Director of MEDEX in 1985 at a time when PAs were emerging as directors of PA programs. During her tenure as Director (1985-2014), the program grew from accepting 20 students for a one-year certificate program to a multiple-training site program that admits 120 students annually in four training sites for either a bachelors or masters degree option (24 or 27 months, respectively). As the only medical school serving the five north western states  — 27% of the US landmass — the University of Washington includes MEDEX in its regional activities. As a result, Ms. Ballweg was actively engaged in health workforce issues in Washington, Wyoming, Montana, Idaho, and Alaska. MEDEX also maintains involvement with rural communities in Oregon and Nevada. Within the School of Medicine she served on the Medical School Executive Committee, the Executive Admissions Committee, the Regional Affairs Committee and the Graduate Medical Education Committee. Her national assignments for MEDEX focused on the expansion of the primary care workforce through her involvement in the Pew Health Professions Commission, the National Advisory Council to the National Health Services Corps, the Primary Health Policy Fellowship, and HRSA’s Title VII Advisory Committee.

In addition, through her role at MEDEX, Ms. Ballweg worked on a Dental Health Therapy Project in collaboration with the Alaska Native Tribal Health Consortium since 2005. Her shared leadership activities involved the development of the program’s competency-based training infrastructure which included recruitment, selection, professional role issues and the development of a supervisory model. She spoke at the Institute of Medicine’s Oral Health Summit, wrote for oral health education journals, and presented about the role of dental therapists at national and international conferences.

Beyond MEDEX, Ms. Ballweg worked extensively with national and regional leaders in the PA, family medicine, and nursing communities and served as a consultant for health care organizations on interdisciplinary primary care teams. Ms. Ballweg served as an elected trustee for Group Health Cooperative —which serves over 600,000 consumer members in Washington State. She was Chair of the Board in 2005 and 2006 and also served for six years as the Chair of the Advisory Committee of Group Health’s Center for Health Studies. She was a past president of the Association of Physician Assistant Programs (now PAEA) and the Washington Academy of Physician Assistants; and she was an Advisor to the Washington State Medical Quality Assurance Commission. From 2002-2008, she served as a PA director-at-large on the Board of Directors of the National Commission on Certification of Physician Assistants (NCCPA). Subsequently, she was an inaugural member of the Board of Directors of the NCCPA Foundation (2006-2011).

Her work and dedication were recognized at the 2012 American Academy of Physician Assistants conference in Toronto, and she was presented with the Eugene A. Stead, Jr. Award of Achievement, the most prestigious award offered by the AAPA. In November 2015, Ms. Ballweg received the first Lifetime Achievement Award from PAEA. She was awarded the Albert Nelson Marquis Lifetime Achievement Award by Marquis Who’s Who in 2018.

In her role as a PA educator, Ms. Ballweg served as a site visitor and/or consultant to many US PA programs. She served on a variety of PAEA committees and task forces related to research, governmental affairs, and international strategies.

Ms. Ballweg served as the Director of International Relations for the NCCPA where she strove to support the international development of the PA profession. In this role, she facilitated international meetings focusing of certification and regulatory issues. In addition, she worked with governments and universities in Canada, the UK, South Africa, Australia, New Zealand, Switzerland, Ghana, Mozambique, Ireland and China to promote the physician assistant concept. In 2015, Ms. Ballweg authored two articles for the inaugural edition of PAGE, the Journal of the Indian Association of Physician Assistants. Click on the titles “Observations on U.S. Physician Assistant History” and “Summarizing 50 Years of Physician Assistant Education” to view those articles.

Ms. Ballweg was a leader of the Physician Assistant History Society since its inception in 2001. She served as the first secretary and served several terms as president, emphasizing the importance of remembering the profession’s past to secure its future. She was a coauthor with Thomas Piemme, Alfred Sadler, Jr. and Reginald Carter of “The Physician Assistant: An Illustrated History,” (2013). She was also an chapter author for the Society’s newest book, Physician Assistants as Social Innovators in Healthcare.

Ms. Ballweg attended and spoke at the first PA graduation ceremony in Ireland in June 2018. Click here to read an article from the Irish Times.

In February 2022, Ms. Ballweg was interviewed by Kevin Lohenry, PhD, PA-C, and Stephane VanderMeulen, MA, MPAS, PA-C, for the PA Path Podcast. Click here to listen to the episode.

Acknowledgments: This biographical sketch was prepared by Ruth Ballweg and submitted to the Society on January 2012 and revised in November 2015 and November 2022. Photographs are courtesy of the PA History Society’s Still Image Collection. 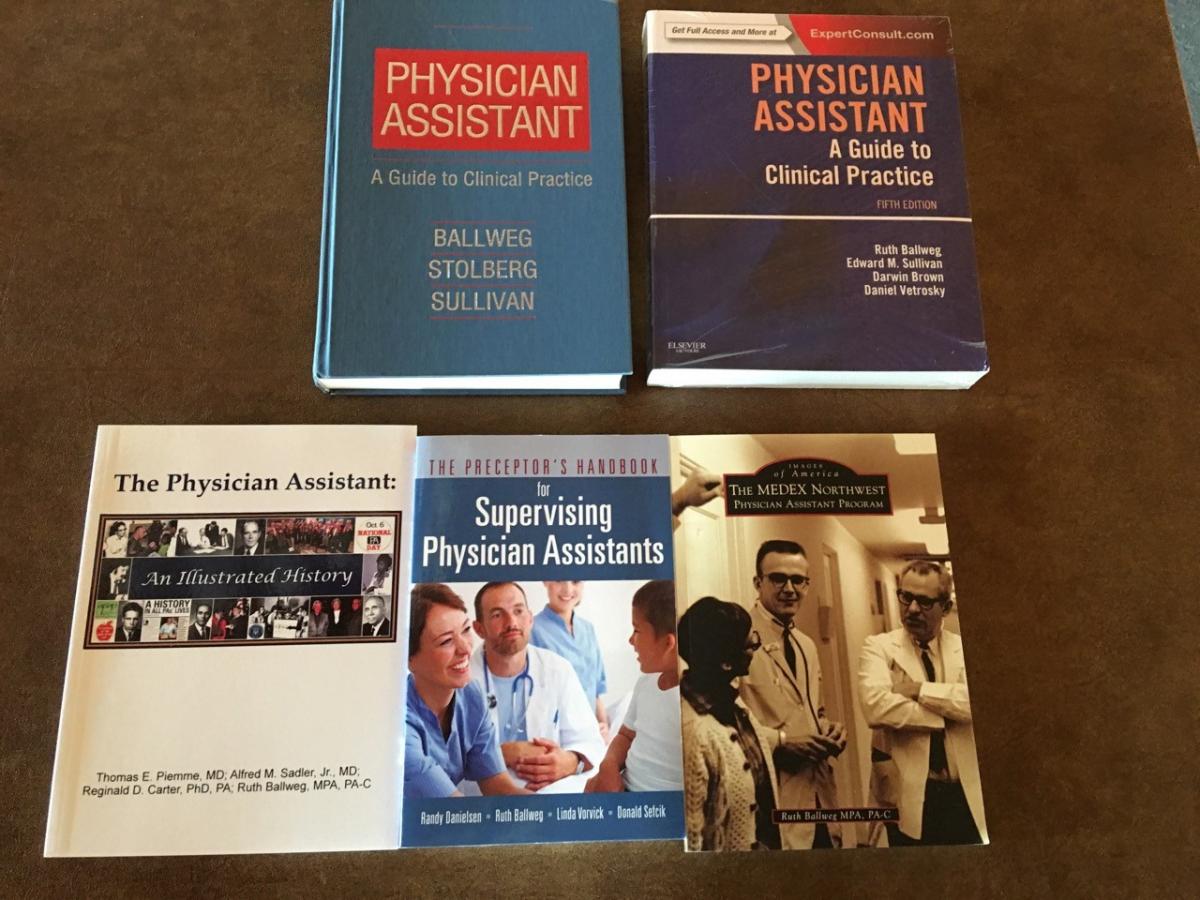 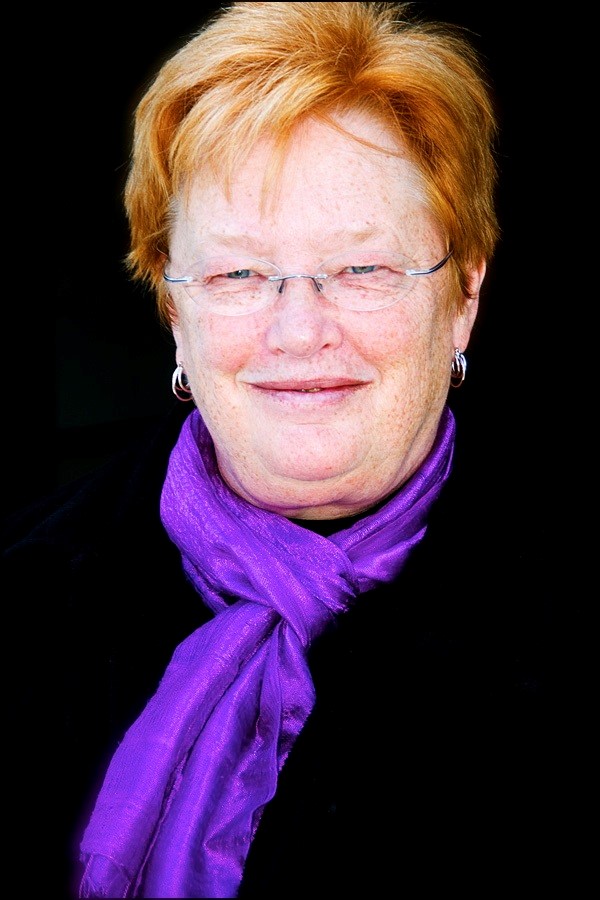 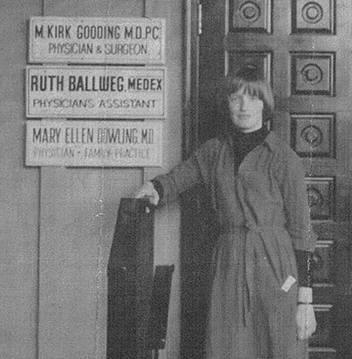 Ruth Ballweg at her first practice in Ashland, Oregon, 1979.