Earl Echard, a 1973 graduate of the Duke University PA Program, worked closely with John Davis, Joyce Nichols and Steve Turnipseed to establish and perpetuate the American Academy of Physician Assistant Minority Affairs Committee. As a student, he coordinated efforts with Davis and Nichols to introduce the PA concept to African American physicians throughout North and South Carolina. They spoke to members of the Old North State Medical Society and other African American medical societies, attended their meetings and exhibited at their conferences. They worked also with the Duke PA Program to identify African American physicians who were willing to precept students during their clinical year.

Echard, a native North Carolinian, completed a clinical laboratory technology school in Minnesota and took a job in Henderson, NC at a 30-bed hospital serving a predominately African American community. He completed the hospital’s x-ray technician program and worked as a medical laboratory and x-ray technician until the hospital closed, a casualty of desegregation. He relocated to Greensboro, NC to work at the L. Richardson Hospital, one of three historically black hospitals remaining in North Carolina. He was drafted into the Army in 1967 and was recommended for the medical corps but instead was assigned to the infantry. He was sent to Vietnam and wounded three times; the last injury was serious enough for him to be sent back to the US to recuperate. While at Fort Benning, GA, the chief of anesthesiology learned of his medical background, placed him on medical hold and made him an anesthesiology technician. It was during this time that his older brother, a military corpsman, sent him a clipping from the Army Times, describing the PA program at Duke University. Once discharged, Echard returned to his job in Greensboro but wanted more in medicine. The following year he applied and was accepted into the Duke PA Program. He recalls that during his clinical year he was asked to take an outpatient medical rotation at the University of Florida. When asked why, he was told bluntly that a black student had never been sent to Florida and they thought he “could handle it.” It turned out to be one of his best learning experiences.

Since graduating in 1973, Echard has worked with disadvantaged patients in homeless shelters, housing projects and prisons. He worked five and one-half years with Lincoln Community Health Center as supervisor of the Bragtown Health Clinic. In 1979 a classmate, Jim Vaughn, who worked in a prison in western NC, told him to look into similar work. He did and spent the next nine years working as a PA in the Wayne Correctional Center and the Eastern Correctional Center near Goldsboro, NC. He later transferred to the Triangle Prison System in Raleigh, NC and in 1995 had the opportunity to help establish the clinical facilities at the Polk Youth Institution in Butner, NC. During this time, he was asked by the Lincoln Community Health Center to establish a clinic for the homeless in Durham, NC

Echard has been recognized by the AAPA for his work with the Minority Affairs Committee (1995), and received a special award of appreciation (1995) for his years of service and tireless work to enhance diversity in the PA profession. The Duke PA Programs gave him an award of appreciation for his work with the program in 1995, and he was named a Distinguished Alumnus in 2003. He was named the Outstanding PA of the Year by the AAPA in 2004. 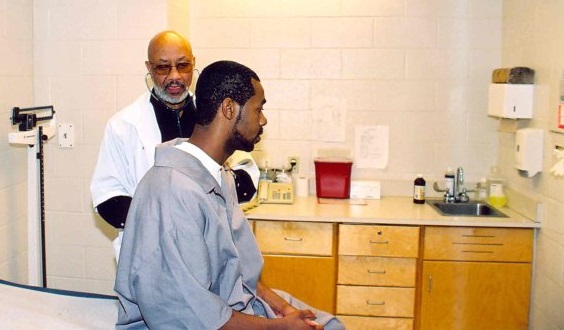