Carl E. Fasser brings a unique perspective on PA education and practice as a founding member of both the American Academy of Physician Assistants and Texas Academy of Physician Assistants (TAPA), and having served twice as president of the AAPA (1974-1975,1980-1981), along with the TAPA (1978-1979), and the Physician Assistant Education Association (1985-1986). While serving in these roles, he introduced the AAPA to prospective budgeting, strategic planning, and research, participated actively in formation of the National Commission on Certification of Physician Assistants (NCCPA) and the AMA Accreditation Review Committee, forerunner to today’s ARC-PA, and was directly involved in decisions to form the House of Delegates and Student Society of the AAPA, and served as Interim Director of the AAPA. As a consultant to the AAPA, he collaborated in establishing and verifying the PA role delineation, developing the process and parameters for self-assessment and feedback for those taking the SAE and later the Pathway II exam. He would also chair the Research Council responsible for building the PA Master file and laying the groundwork for today’s Annual Census. The most important long-term outcome of his tenure as president came when the Academy agreed to provide space and support of PAEA (formerly APAP) in exchange for PAEA’s share of the proceeds resulting from the annual PA meeting. As TAPA president, he obtained grant support to facilitate the costs of offering continuing medical education for PAs in Texas and worked with the Texas Medical Board to develop the initial language that allowed for the codification of PA practice in the state. He continues to work with the medical board and PA board to offer a re-entry to clinical practice program for PAs that have stepped away from clinical practice for a period of time.

Fasser served as a medical corpsman in the Air Force and worked as a dialysis technician before becoming a student in the Physician Associate Program at Duke University Medical Center where he graduated with honors in 1969. His long career in PA education began shortly following graduation when he assumed the position of academic coordinator for the Duke PA Program and faculty member in the Department of Community Health Sciences, while practicing as a PA in the Faculty Health Clinic. While serving in this role he revised the learning experiences in clinical medicine and physical diagnosis, developed clinical rotations in pediatrics, obstetrics and gynecology, and psychiatry, participated in drafting the early essentials for program accreditation, and the proposal to the award of a bachelor’s degree to graduates of the Duke PA Program. In 1971, he was recruited to Houston to establish Baylor College of Medicine’s Physician Assistant Program. Between 1975 and 1990, he was instrumental in bringing a community-oriented primary care focus to the curriculum and transitioning the learning experiences offered students to a graduate level leading to a Master of Science degree. He would likewise oversee the implementation of the first program of student-based faculty-mentored original research and the use of high stakes exams as requirements for graduation.

Prior to rejoining the faculty of Baylor College of Medicine in August 2002, Fasser served as founding dean of the School of Health Sciences, and chairman of the Department of Physician Assistant Studies at Massachusetts College of Pharmacy and Health Sciences in Boston. His knowledge of Harvard’s original interest in starting a PA program in the 1970s would result in the Dean of Medicine of Harvard Medical School agreeing to allow its faculty and affiliated clinical facilities to assist in the training of PA students enrolled in the MCPHS PA Program. Along with program faculty members, he would establish a program of Service Learning that brought students and faculty into the underserved neighborhoods communities surrounding Longwood Avenue and the Colleges of the Fenway with financial support provided by the Health Resources and Services Administration. Underserved Native American reservation in Maine also became part of the community-based sites for clinical rotations. His greatest accomplishment involved the development and implementation of a six-year model for PA education mirroring that used by doctor of pharmacy programs across the United States.

Over the period of three decades, he has received numerous awards recognizing his contributions to PA education and the profession. Significant among these awards are the AAPA Founder’s Award, PAEA Master Faculty Award, BCM’s Fulbright & Jaworski Faculty Excellence Award for Educational Leadership, Barbara and Corbin J. Robertson Presidential Award for Excellence in Education, and Alumni Association’s Distinguished Faculty Award, the J David Holcomb Award for Sustained Leadership in Allied Health Education, being recognized among the Best Minds of Baylor College of Medicine, being inducted into the Duke PA Program Hall of Fame as a distinguished Alumnus, and earning recognition as a Distinguished Fellow of the AAPA.

His academic interests encompass student instruction, interdisciplinary education, and health services research. His favorite academic subjects continue to be gross anatomy, problem solving in medicine, evidence-based practice, shared decisions making, and global health. From a curriculum design standpoint, his interests center on cancer risk assessment in clinical practice, chronic disease management, faculty development. The focus of his current research is on factors affecting the consultation and referral practices of primary care providers. An outcome of these interests is a series of publications on a wide range of forces affecting PA practice.

Acknowledgments: This biography was written by Carl Fasser with the assistance of Reginald Carter, and was submitted to the Society in October 2012. The portrait photograph is courtesy of Mr. Fasser. The second photo is from the Fasser Slide Collection, Physician Assistant History Society, Johns Creek, GA. 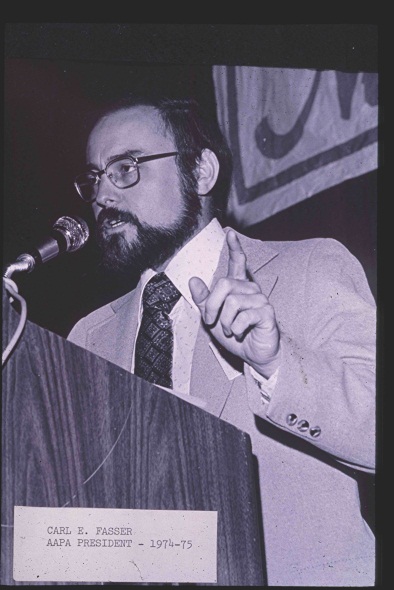