COL Michael E. Franco is a graduate from Texas State University with a Bachelor of Science degree in Microbiology and was commissioned in the Medical Service Corps as a Distinguished Military Graduate prior to transitioning to the Army Medical Specialist Corps.  Before receiving his commission he served in the Texas National Guard with Company C, 6th Battalion, 112th Armor and Company G (Long Range Surveillance), 143rd Infantry Regiment.

Acknowledgments: This biography was written by LTC Amelia Duran-Stanton, MAJ Patrick Walsh, and COL Michael Franco and was submitted to the Society in September 2017. Photographs are courtesy of COL Franco. 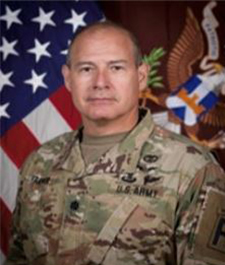