Suzanne Greenberg was the first woman and non-physician to help start and direct a physician assistant program in the United States. She served as the American Registry of Physicians’ Associates Secretary and Treasurer shortly after it was founded in 1970 and continued in that role for the Association of Physician Assistant Programs (APAP) when it was formed in 1972 as an umbrella organization for the Registry and a new organization for PA educators. As an officer of the Association, she played a pivotal role in helping shape the organization’s mission and expanding its membership. She was elected president of the Association in 1988. Greenberg helped organize PA programs into a northeast consortium to address regional problems and worked closely with the state’s medical society to improve PA enabling legislation in Massachusetts. She was recognized as being the profession’s longest serving program director when she relinquished her position at Northeastern University in 2006.

Born and raised in Brookline, Massachusetts, Greenberg graduated from Bryn Mawr College in 1951, having majored in Political Science and minored in Labor Economics. She was elected and remains co-president of her Bryn Mawr class. After a year working at the Braille Press at the Perkins Institution for the Blind, she attended Simmons College graduating in 1954 with a major in Psychiatric Social Work.

After working as a social worker both in a family agency and a mental health institution, and with brief periods of being at home to raise four children, Greenberg worked as a researcher for the Veteran’s Administration, Boston University Law-Medicine Institute, The Commonwealth Service Corps and the Florence Heller School of Advanced Studies at Brandeis University. From 1965 to 1971 she directed a training Center affiliated with Tufts University School of Medicine and the Massachusetts Health Research Institute/Massachusetts Department of Public Health. During this time, she developed short term training programs to promote home care and implement Medicare as well as train new careerists for jobs in health care. Greenberg also ran continuing education programs for family practitioners sponsored by Tufts University School of Medicine.

She was directing the Training Center for Comprehensive Care when Dr. Lamar Soutter approached and asked her to consider developing a program to train physician assistants. Dr. Soutter was a member of the Academy of Arts and Science and had been at a meeting in Washington when the idea was broached. Who suggested her name to Dr. Soutter is not known, but he appeared in her office at the Lemuel Shattuck Hospital one day and put forth the idea. It took two years and a grant from the Office of Economic Opportunity, which had been funding much of the Center’s training efforts, for her to decide to undertake the challenge. By then Dr. Soutter was the incoming president of the Massachusetts Medical Society which co­sponsored the program for several years and was a tremendous help in publicizing it.

Having trained over 600 people for new health careers, Greenberg had become disillusioned knowing that the inner city residents whom she had trained were competent and reliable, but were often the first fired and last hired when jobs were scarce. She felt that it was unfair to continue to raise the hopes of people, who in many cases had been on welfare, only to let them down again when the job market fluctuated.

Beginning a physician assistant program in Boston was a challenge, as it was everywhere. While the original grant went to Tufts University School of Medicine, the administration, while sympathetic to the concept, wanted more overhead so Greenberg had to find another institutional home for the program. None of the medical schools were interested, but fortunately, Northeastern University, with its emphasis on cooperative education was supportive. So, in April of 1971 the program moved to Northeastern. She continued to direct the program until August of 2006. During that time, she was active in the University as well as in APAP. At the University she chaired the University Senate Agenda Committee and maintained a relationship with the medical school by serving on its admission’s committee. She also chaired the University’s Program Review Committee for the Graduate Council. As a founding member of the Association of Physician Assistant Programs, Greenberg has served on or chaired almost all of the organization’s committees and was president of the organization from May 1988 to May 1989. In addition, she maintained her community involvement by serving on the Hillel Council of Greater Boston for nineteen years and as its president from May 1989 to May 1991.

Greenberg was instrumental in helping to establish a Board of Approval and Registration of Physician Assistants in Massachusetts and active in the development of the present Board of Registration of PAs, both serving on it and as its chair from January 1990 to May 1992. She was also instrumental, along with a cadre of physician assistants, and nurse practitioners, in introducing and promoting the passage of legislation for PAs in the Commonwealth to prescribe medications.

Presently, Greenberg is the Associate Dean and Director of the Bouve College of Health Sciences Graduate School and a member of the Massachusetts Board of Allied Mental Health and Human Services. She still works full time, does some traveling and spends time with her seven grandchildren. Her husband of fifty years, Mortimer S. Greenberg, MD, died in 2003. He both taught in and was a tremendous support not only of the program but in identifying faculty for it. 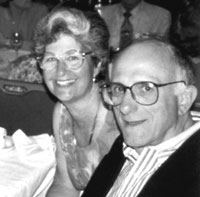