As the nation’s first African American Physician Assistant (PA), Prentiss Harrison helped pioneer the profession. As a student and graduate of the Duke University PA Program, he helped educate African American physicians about the PA concept. He did this by attending and exhibiting at their local and national medical society meetings. He recalled that in the early days that many African American physicians who visited the AAPA exhibit during their conferences had a multitude of thoughts about the PA concept. Probably 40 percent were for the concept while the other 60 percent felt that medical schools needed to educate more African American doctors instead of PAs. After graduating in 1968, he worked full time at Duke University Hospital in neonatology and part-time at Lincoln Hospital which served primarily the African American community in Durham, NC. As a joint project between Duke’s Department of Community Health Sciences and Lincoln Hospital, he staffed one of the first satellite rural health clinics in the country. He worked closely with Earl Echard, John Davis, Steve Turnipseed and Joyce Nichols to establish the AAPA minorities’ affair committee in the early 1970s.

Harrison left his position at Duke to work in student health at Princeton University, NJ. After five years on the job, a nurse complained to the New Jersey Board of Medical Examiners about Harrison’s role and he was barred from further practice in the state. His supervising physician and the University were prepared to take his case to court to defend his rights to practice as a PA even though New Jersey had no legislation recognizing PAs at the time. However, Harrison decided not to participate in the legal fray but to seek employment in another state more receptive to the use of PAs. It would take New Jersey two decades (1992) to finally pass enabling legislature for PAs.

Harrison was reared and attended high school in Texas. He completed high school in 1961 and enlisted in the US Army where he was trained as a medical corpsman. He spent most of his enlistment with the 82nd Airborne at Fort Bragg, NC. After service, he trained and worked as an operating room technician at the University of North Carolina Memorial Hospital, Chapel Hill, NC. He was working at Duke University Hospital as a urological research technician when accepted into the second class of PA students. He began his studies in September 1966. He was 22 years old at the time. As the program’s first African American student, he was determined to succeed and had several prominent African American physicians in Durham supporting his efforts. These individuals included Dr. Donald Moore, a gynecologist, and Dr. Charles Curry, Chief of Medicine at Lincoln Hospital. He also befriended Dr. Wilhelm D. Meriwether who was the first African American medical student to attend Duke.

After being barred from practicing as a PA at Princeton University, Harrison moved in to Houston, TX. He was encouraged to do so by Carl Fasser, a fellow Duke PA graduate. Dr. Henry McIntosh, a former cardiologist at Duke University, had hired Fasser to establish a PA program at Baylor College of Medicine (BCM). Harrison accepted a junior faculty position within the General Medicine Section of the Ben Taub General Hospital, an affiliated teaching site of BCM. After a number of years caring for patients with general medical problems, he focused his efforts on caring for the needs of those with HIV infection. These experiences would eventually lead to his interest in pain management. Even while busy with patient care and research, he always found the time to precept students enrolled in various Texas PA Programs and to talk to them about health care issues in clinical practice.

Before retirement, Harrison was the chief operations officer of the I-10 Family Clinic which he opened in 2004. The clinic was located in an underserved community in East Houston. He and his wife Crystal lived in Pine Hurst, Texas while their extended family lived in Greensboro, NC. His second passion was breeding and racing quarter horses.

Harrison has been recognized by the AAPA African Heritage Caucus for his pioneering efforts in the PA profession.

Prentiss Harrison passed away in December of 2018.

Acknowledgment: This biography was prepared by Reginald Carter with the assistance of Carl Fasser and submitted to the Society on September 17, 2007. The biography was updated in December of 2018. 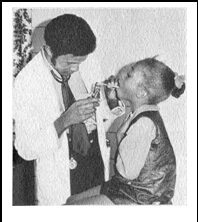