LTC Randolph “Scott” Harrison is currently the Associate Dean of Administration at the AMEDDC&S HRCoE. He graduated from Army ROTC at Florida Southern College in the 1990’s.  He was commissioned a Medical Service Corps Officer and attended AMEDD Officer Basic Course, Ft. Sam Houston, TX. His first duty assignment was HHC,    1-35 Armored Regiment, 1st AD, Baumholder, Germany as a Medical Platoon Leader where he deployed to Bosnia for Operation Joint Forge.  He then moved to Mannheim Health Clinic, ERMC, as the Executive Officer.  Early in 2000, then 1LT Harrison, was selected to return to AMEDD C&S Leader Development Branch as a Small Group  Instructor for the Officer Basic Course.

In early 2000, then CPT Harrison was selected to take a Company Command in the XVIIIth Airborne Corps support mission of the 1st United States Support Battalion, Multinational Force and Observers (MFO) Sinai, Egypt.  He was accepted into the Interservice Physician Assistant Program (IPAP) in August of 2003.  Upon successful completion of PA school, he reported to Ft. Bliss, TX in September of 2005 to 27th Base Support Battalion, 4th Brigade, 1st Cavalry Division.  This was a new brigade that was just standing up, and he was the only PA in the brigade for the first year.  In November of 2006, he deployed with 2-7 Infantry to Northern Iraq for 14 months.  Upon return from Iraq, he moved to Ft. Stewart, GA to 2-7 Infantry Battalion, 1st Brigade, 3rd Infantry Division.  Shortly after his arrival, his brigade became first   Active Duty CBRNE and    Consequence Management Response Force (CCRMF) for the next 12 months.  Upon completion of this mission, he deployed with 2-7  Infantry to Central Iraq.   During this deployment, he spent most of his time working and living with the Iraq Divisions conducting mission and training.

After returning from Iraq, then MAJ Harrison was selected to become the Phase 2 Clinical Coordinator at Winn Army Community Hospital in March of 2011.  Continuing down the educational pathway, he was the first PA in Army history to be selected for Training with Industry (TWI).  This inaugural journey began with the National Commission on the Certification of Physician Assistants (NCCPA) in Johns Creek, GA.  During his tenure, he acquired a national understanding of the PA Profession and appreciation for the profession of national examination preparation.

Completion of the utilization tour for TWI was at the IPAP in Ft. Sam Houston, TX.  Upon his arrival, he quickly began instructing the next generation of PA students.  During his time there previous experience came together to assist the IPAP and its 22 Phase 2 clinical sites as the Army Clinical Coordinator, Deputy Army Branch Chief, and the first IPAP Executive Officer.  In June of 2017, LTC Harrison was selected by the Dean of the Graduate School to become the Associate Dean of Administration.

Acknowledgments: This biography was written by LTC Amelia Duran-Stanton, MAJ Patrick Walsh, and LTC Randolph Harrison and was submitted to the Society in September 2017. Photographs are courtesy of LTC Harrison. 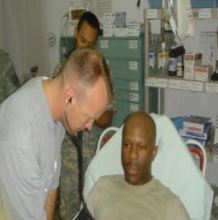 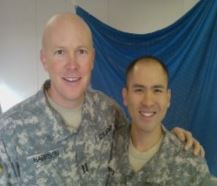 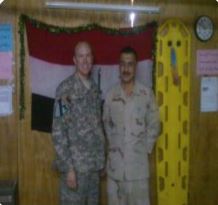