Chip Hedrick, MPAS, PA-C (1946 – ) is one of the early pioneers of the physician assistant profession. During his PA career, Mr. Hedrick has worked primarily in trauma and orthopaedics. He currently practices at the Triangle Orthopaedic Assosicates in Raleigh, North Carolina.

Mr. Hedrick received honorable discharge in August 1971 at the rank of Hospital Corpsman Second Class (HM2 E-5) in 1971. He received numerous awards for his service, including one for National Defense, Good Conduct and other Vietnam service awards. In addition, he was awarded the Navy Commendation, which was given to him when he and his team rescued and provided aid to 161 sailors from an explosion on the USS Forrestal, an aircraft carrier in the Gulf of Tonkin.

While Mr. Hedrick was in Vietnam, he read an article about physician assistant programs and felt that, with his medical service and experience in the Navy, a PA career was the right direction for him. One month after graduating from Central Virginia Community College in Lynchburg, Virginia in 1969, Mr. Hedrick attended the PA program at Alderson-Broaddus College in Philippi, West Virginia, which was the first four-year PA program in the United States. He graduated in its first class of PA students in 1972. Mr. Hedrick returned to the classroom almost 30 years later and earned his master’s in physician assistant studies (MPAS), specializing in orthopaedic surgery, in 2000.

Mr. Hedrick’s work experience in the medical field began over 40 years ago in 1968. He was employed at Virginia Baptist Hospital from 1968-1969 as a practical nurse, where his primary responsibility was patient care. It was at this hospital that he met his wife who was in training as an OR technician. During the years he attended PA school, Mr. Hedrick worked in the emergency room at Broaddus Hospital in Philippi, West Virginia. He found his experience as a medic in the military very helpful in this role.

Mr. Hedrick began working as a certified physician assistant at the Northwest Kaiser Permanente Medical Group in Portland, Oregon upon graduation in 1972. His experiences included practicing as a PA in the Department of Surgery and Emergency Medicine (1972-1977) and in Trauma/Urgent Care (1977-1989) and the Department of Orthopaedics (1981-1990) at Kaiser Sunnyside Medical Center. Mr. Hedrick also established and staffed a sports medicine clinic at Kaiser from 1981-1989. He was transferred to the Southeast Kaiser Permanente Medical Group in Raleigh, North Carolina, in 1989. He worked there from 1989-1992, where he established and directed the Department of Urgent Care and worked in the Department of Orthopaedics. Mr. Hedrick also worked for Raleigh Orthopaedics from 1992-2001 before joining Orthopaedic & Sports Medicine Associates where he practiced pediatric and general orthopaedics and was Medical Director for the Group from 2002-2007. Orthopaedic & Sports Medicine merged with Triangle Orthopaedic Associates in 2007.

As a practicing PA in the earlier years of the profession, Mr. Hedrick experienced some resistance. Mr. Hedrick remembers it was “difficult to convince the medical community we were real health care providers. Some physicians in the local community were upset about the expanding roles of the PAs. Prior to Kaiser entering the medical market place, there were no PAs in the community with the same scope of practice, so it was natural to expand our roles to do outpatient procedures such as screening sigmoidoscopies. Community physicians were very upset with this news but it was only a short time before they hired their own PAs and utilized them in the same manner; Kaiser was just ahead of the curve” (personal communication, April 18 and June 29, 2012). By the time Mr. Hedrick left the Kaiser Group to work in private practice, he and other PAs had earned the respect in the medical community they worked so hard for.

Mr. Hedrick always wanted to be more than just a provider; he wanted to take a leadership role in the overall organization and have some input in decision making. He was involved with several committees during his 17-year career at Kaiser, including Infectious Disease, Quality Assurance, Allied Health Council, Physician Assistant Advisory Board, Ambulatory Care Quality Assurance, Environmental Health and Safety, Primary Care Task Force, and Health Education Providers. He also chaired the compensation committee for all non-physician providers (PAs, NPs, social workers, podiatrists, optometrists, and alcohol treatment specialists). While practicing at Raleigh Orthopaedics, Mr. Hedrick was actively involved in the Quality Council, Continued Quality Improvement, and Operations committees.

Early on in his career, Mr. Hedrick learned the importance of working with physicians in the community to help educate them on the role of physician assistants. He understood that what was good for physicians was also good for PAs since they worked so closely together, and because PAs would not be able to work without physician supervision. Mr. Hedrick felt the best way to accomplish this would be to get involved in the North Carolina Medical Society. With the help of the late Dr. Thomas Dameron, he was allowed to become a member of the Medical Society. From the beginning he asked to be appointed to committees, and, today, he continues to serve on the Managed Care Committee, Clinical Quality and Health Care financing committee, and as Treasurer for the North Carolina Medical Society Political Action Committee Board of Directors. He is also a member of the Accountable Care Organization Task Force.

Further illustrating his desire to extend his contributions beyond the examination room, Mr. Hedrick spent considerable time on special projects. One he found particularly exciting was his appearance on the TODAY Show on October 20, 1970. The reporter, Paul Cunningham, went to Alderson-Broaddus College while Mr. Hedrick was earning his bachelors degree, and he did a story on the emerging physician assistant profession. Mr. Hedrick’s role in the segment was to perform a post-op check on a patient. He also contributed to articles examining hospital stay, infection rates, and issues with surgical incisions for Clinical Pathways and Clinical Outcomes for Orthopaedics and was the medical provider for the Special Olympics (1999), Adidas Outdoor Track and Field Championships (June 2002), and the Carolina Mud Cat’s AA team for the Colorado Rockies (2000-2003) and Florida Marlins (2003-2005). Mr. Hedrick participated in a medical interview for WRAL TV News at Noon (2004) and was the HIPAA Privacy Officer for Orthopaedic and Sports Medicine.

Several accolades were awarded to Mr. Hedrick for his dedicated service to the physician assistant profession. In 2003, he was recognized as Physician Assistant of the Year for North Carolina and was named a Distinguished Fellow of the American Academy of Physician Assistants (AAPA) in 2007.
In December 2012, Mr. Hedrick and his wife, Kaye, will celebrate their 44th anniversary. They have two sons and currently reside in Raleigh, North Carolina.

Acknowledgments: This biography was written by Keri Caudill, PA History Society, with the assistance of Edward Hedrick and was submitted to the Society in July 2012. 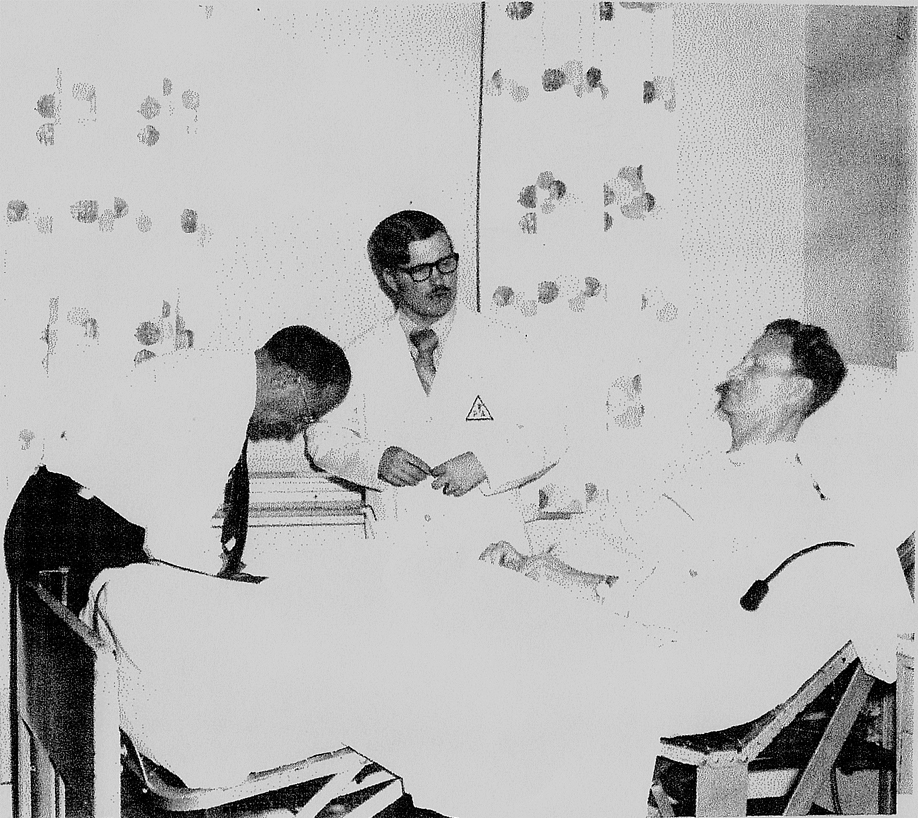 Edward Hedrick during the Today showing filming, 1970 at Alderson-Broaddus college