George McCullough, a US Air Force corpsman and pharmacist technician, graduated as a member of the second class of PAs from the joint Sheppard Air Force Base/University of Nebraska PA program in 1972. In 1974, he became the first enlisted (active duty) person to be elected to the AAPA Board of Directors. He was the first PA assigned to the Surgeon General’s office to develop PA and NP performance regulations for the uniformed services. As a Washington insider, he was an active advocate for the commissioning of PAs in the US Air Force. When commissioning was approved, McCullough was serving as a PA on the White House medical staff; the first PA to be assigned to this post; and was the first US Air Force PA to be commissioned. The ceremony was held in 1978 at the White House during the Carter Administration.

McCullough was born in Charleston, SC, but moved to Brunswick, GA, as a child. He joined the Air Force a year after graduating from high school in 1954 and was assigned to the medical corps. He was cross-trained as a pharmacy technician and as a corpsman and ran a pharmacy at Andersen Air Force Base, Guam. Later while stationed in Texas, he volunteered to be a carrier during Vietnam conflict. He flew all over world and into Vietnam regularly transporting classified documents for the military from 1969 to 1971. When the Air Force established its physician assistant training program, McCullough applied and was accepted into the second cohort of students. The program was a joint effort of the Air Force and the University of Nebraska. The training facility was at Shepard Air Force Base, Wichita Falls, TX. He graduated in 1972 and returned to Shepard for the first national conference on new health practitioners held in April 1973. After graduation, he served as a PA at Homestead, FL in primary care until he was assigned to the Surgeon’s General’s office in Washington, DC.

In 1974, he was elected to the AAPA Board of Directors and became the spokesman for military PAs. He joined with others to advocate for the commissioning of PAs in the Air Force. Lt. Gen. George E. Schafer, Air Force Surgeon General, was supportive of these efforts since the Air Force was lagging behind the other military services in commissioning its PAs. During the meantime, he and other PAs completed nursing education and became RNs. When given the opportunity to become commissioned as Air Force NPs, McCullough refused the offer instead continuing to advocate for the commissioning of PAs. Being an RN, however was helpful, when dealing with the Air Force nursing leadership.

When it was decided to add a PA to the president’s medical staff, McCullough was selected from nine candidates for the position, serving with one physician, three nurses and two corpsmen at the white house during the Carter and later Reagan administrations. Commissioning was approved for Air Force PAs, and he took the opportunity to be commissioned in the President’s office in 1978. He was instrumental in getting First Lady, Rosalynn Carter, to speak on Mental Health, at the AAPA National Conference held in New Orleans in 1980. He remembers fondly helping President Reagan on the ranch cutting brush or chopping wood.

During his eight years serving on the AAPA Board, McCullough witnessed the establishment of the national office and the formation of the House of Delegates. He saw the membership grow and the number of attendees at the national meeting quadruple. After retiring from the Air Force, he entered private practice in occupational medicine, currently working in Melbourne, FL.

Acknowledgments: This biography was written by Reginald Carter with the assistance of George McCullough, and was submitted to the Society in September 2013. The photographs are courtesy of the PA History Society, Johns Creek, GA. 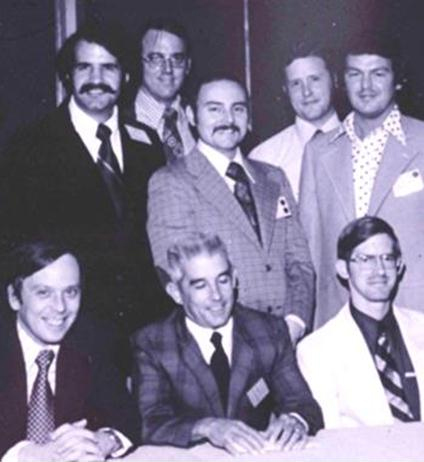