Dr. John McElligott began his medical career when he enlisted in the Navy during the Vietnam conflict. Trained as a Navy hospital corpsman, McElligott was attached to a Marine Air Wing that did medical evacuation by helicopter in Vietnam. As a corpsman he was injured while flying medivac. After returning home from Vietnam John became a physician assistant, graduating from the Duke University PA Program in 1974. While at Duke, McElligott was elected as the 2nd national student president of the American Academy of Physician Assistants (AAPA) and served as the student representative to the AAPA Board of Directors from 1973 to 1974 and served after graduation on the Board from 1977 to 1978.

Upon graduation, McElligott was recruited by the University of Texas at Dallas to help establish a PA program. During a clinical site visit to Colorado City, Texas, the rural doctors asked him to consider leaving academia and come to work for them in the community of 6000, including office, hospital, nursing home, surgery, and emergency room. The three doctors were in their late 60’s and were in great need of help. After a few weeks of long, grueling hours McElligott contacted a former classmate, Charlie Clark, to work with him in this historic endeavor. Their practice is documented in a film produced by the Oklahoma and Texas PA Academies titled Physician Assistants: Partners in Primary Care. McElligott and Clark spent years practicing together. This included an appearance before the state medical board for practicing medicine without a license. This appearance by the two PAs and the doctors helped Texas licensure law for PA’s. After Colorado City, they moved to Manteo, NC to work in family practice and while there established one of the first medivac services in eastern NC. Later they went to Oak Ridge, TN and while working clinically completed MPH degrees (1982) in Occupational Health and Safety at the University of Tennessee in Knoxville. Simultaneously in Lake City, TN they established the first independent PA emergency room/hospital coverage group ever employing 5 additional PAs. This endeavor began as weekend coverage and was overwhelmingly accepted by the rural physicians, and community.

After 15 years practicing as a PA, McElligott’s passion for medicine convinced him that he should advance his knowledge and capabilities with further study. He applied and was accepted to the Caribbean-based medical school, St. Lucia’s Spartan Health Science University School of Medicine, located in El Paso, Texas in 1986. He took the medical boards in his 2nd year of medical school and passed, he said, because of his PA training and experience, and graduated first in his class. John’s three-year Internal Medicine Residency was done at Griffin Hospital in Connecticut. While there, John was also a faculty member at St. Mary’s Hospital in Waterbury, CT, serving as Director of Research and Development for Trauma from 1985 to 1989.Following his Board Certification in Internal Medicine in 1989, John became a Fellow of the American College of Physicians (FACP) in 1993.

As a physician he has continued his commitment to PAs and served as Senior Medical Director for the startup of South College Physician Assistant Program in Knoxville, Tennessee from 2007 to 2009. He has employed many PAs in his years in private practice and occupational medicine in Knoxville TN. He continues as faculty consultant at the Griffin Hospital/Yale University School of Medicine Affiliate in Derby, Connecticut.

As a Navy veteran, and a mentee of Eugene Stead, M. D., founder of the PA profession, he has been a major supporter of the Physician Assistant History Society from its inception in 2002. He made it possible for the Society to move its offices into the Eugene A. Stead Center for Physician Assistants located in Durham, NC when the building was opened in 2006. In 2009, the North Carolina Academy of Physician Assistants and the PA History Society named the Veteran Garden located at the Stead Center in his honor and the former military corpsmen, like him, who helped pioneer the PA profession.

Dr. Stead and Dr. McElligott spoke many times of the “bridge” program, one of Dr. Stead’s unfulfilled dreams for medical education. The idea was an attempt to bridge the gap between education of the physician assistant and that of the physician. He believed that PAs could be further trained to become physicians. John McElligott has wrestled with this idea for some time. Although he has not found a medical school that he could identify as one that would take physician assistants, test them, and forward their education as physicians, he said he would make himself available to counsel PAs who might be considering the medical degree.

In 1998, Dr. McElligott founded and became President and CEO of Occupational Health Systems, Inc., Knoxville, TN. He is a co-founder of the St. Christopher Trucker Development and Relief Fund serving as the organizations Medical Director from 2007 to present. Over time, he has received many awards for his academic, clinical and community outreach activities.

Acknowledgments: This biography was written by Maryann Ramos with the assistance of John McElligott, Reginald Carter and Charles Clark MD and was submitted to the Society in May 2016. The banner portrait photograph is courtesy of Dr. McElligott. The second photograph is a snap shot from the film, Physician Assistants: Partners in Primary Care, showing McElligott examining patient. Some of the information used for this biography is from an article that appeared in the Duke University PA Program Newsletter dated November, 2001. 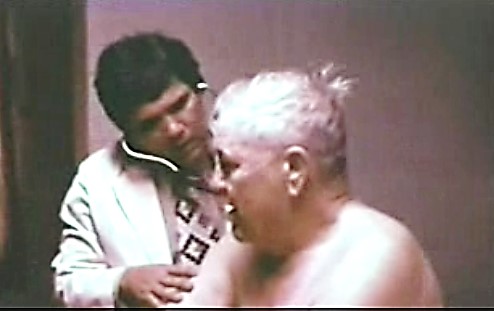