Paul Moson, PA, MBA, was one of the earliest propagators of the PA profession. An ex-Navy corpsman and 1968 graduate of Duke’s second PA class, he was one of the founding leaders of the AAPA and the Yale School of Medicine’s iconic PA program.

In June 1970, he was hired by Yale Chair of Surgery, Jack Cole, MD, to collaborate in the development of a Type-A PA program. Working with other Yale faculty members, Moson helped to develop a curriculum and select students for the first two PA classes in January and September 1971. In 1979, Moson became Director of the Yale PA Program before leaving to lead the development of the PA Program at St. Francis College in Loretto, PA. In 1976, he helped establish the Yale-Norwalk PA Surgical Residency Program with assistance from J. Jeffrey Heinrich, PA and Bruce Fichandler, PA.

In addition, Moson was a germinal leader who helped to form and preside over several key national organizations, notably President of AAPA, Secretary of APAP (now PAEA) and as an early Commissioner of the NCCPA.
Born December 31, 1940, Moson was raised and educated in Chicopee, Massachusetts. He served in the Navy from 1959-1963 as a US Navy corpsman and operating room technician.

Upon discharge, he attended the University of Vermont for two years until he learned about the Duke PA program in a 1966 LOOK magazine article “More Than a Nurse. Less Than a Doctor” by Roland Berg. He applied to Duke and was accepted immediately into its second class because of an unexpected opening. He graduated in September 1968 and took a joint position as a PA at the University of Vermont Clinical Research Unit and the Regional Medical Program.

Subsequently, Moson’s talents were realized in the private sector as head of Research and Development for SSI/Hill-Rom’s Hospital Bed Division where he oversaw clinical trials, Regulatory Affairs and infection control initiatives, following which he was an executive in medical communication systems for Executone.

Moson is currently semi-retired and owner of Primus SEARCH, a job placement service for physician assistants and medical sales people. He and his wife, Anne-Lise, reside in Cape Elizabeth, Maine.

Acknowledgments: This biography was written by Ann Bliss, BS, RN, MSW, LCSW, with the assistance of Paul Moson, and was submitted to the Society in March 2015. The photographs are courtesy of Paul Moson. (Photo: Paul Moson (right) with two students from the first Yale PA class, 1971) 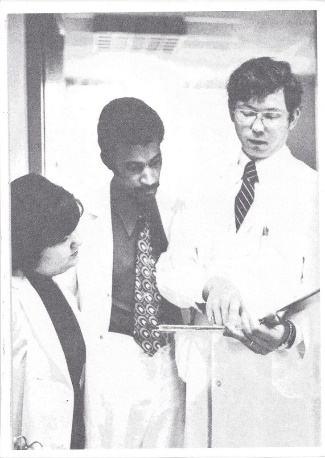