Gregg Munson was like a lot of kids that grew up in the 50s: he had the experience of “house-calls”, which was when a general practice doctor would visit the home.  Dr. Williams came to Mr. Munson’s home to care for his grandparents and other members of the family.  There was something magical in that large black case that seemed to unfold forever in multiple directions, exposing a magnitude of bottles, glass syringes, and instruments. The bearer of such great treasures and knowledge, the providing of professional and compassionate care, left an indelible mark on young Mr. Munson.

Dr. Williams’s influence led Mr. Munson to leave home to attend Indiana University to study pre-med in 1965.  During the summers of his first two years of college, Mr. Munson worked in two different hospitals.  In one, he worked as an orderly on a med-surg floor and in the psychiatric unit.  In the other, he worked within surgery which ignited his passion for the surgical specialty.  By 1967, the Vietnam war was escalating and the idea of either enlisting or being drafted became a decision needing to be made.  He enlisted in the Air Force and requested to become an OR technician.  Basic training was in San Antonio Texas, and his first duty station was Kincheloe Air Force Base, Sault St. Marie, Michigan.  He then spent three and a half years stationed at RAF Lakenheath, in Suffolk, Great Britain.  It was here that a nurse gave him information on the Surgeons Assistant Program at the University of Alabama in Birmingham (UAB).  Mr. Munson left the service in 1971 and returned home to Indianapolis to complete an undergraduate degree in August 1973 at Indiana University. He then prepared for his life’s work at UAB that same fall, completing his training in 1975.

Mr. Munson’s 42-year career as a PA began in cardiovascular surgery at the Geisinger Medical Center in Pennsylvania in 1975.  The surgeon at Geisinger knew Dr. Kirklin, the founder of the Surgeons Assistant Program, and so went to UAB to recruit.  In 1978, Mr. Munson went on to join a private cardiac surgery group in Grand Rapids, Michigan with privileges at Butterworth Hospital (now Spectrum Hospital).  While the six PAs that worked there soon proved themselves capable of managing patients on the floor and in the ICU, as well as assisting in surgery on a 24/7 basis. Other hospitals in the area were not too keen on seeing PAs entering this type of care, but the precedent had been set and years later they would come around.  Mr. Munson moved back to Indianapolis in 1988 and joined Corvasc in performing over 2,000 cases a year.  An opportunity to not only stay in surgery but to work on the business side of a practice led him to accept a position in 2001 with Indiana Heart Surgeons in Indianapolis.  When that surgeon of the practice moved to Florida in 2006, Mr. Munson saw a position being created for him as the PA for the Thoracic Surgery Division at the Indiana University Medical School.  He retired from Indiana University in 2017.

While his clinical skill and knowledge in cardiothoracic surgery left little time for much else, Mr. Munson made time to give back and ensure the profession’s continued growth.  Being a groundbreaker in the early years of the Association of Physician Assistants in Cardiovascular Surgery (APACVS), he served as Central Region Director from 1986-1989, Vice-President from 1989-1991, then President from 1991-1995.  From 1995-2001, he was the APACVS Liaison with the Society of Thoracic Surgeons and worked tirelessly to secure that organization’s support of PAs in CV surgery.  Today, he continues to serve as Historian for APACVS.  He also served PAs and the public of Indiana as a member of the Indiana Professional Licensing Agency, Physician Assistant Committee (2006-2016). He serves as Deacon in his church and his civic pride is recognized in the Service Club of Indianapolis.

Retirement has meant refining his interests in wines and cigars, as well as golf, gardening, reading and cooking.  He shares this time with his wife Chris, a nurse whom he met back at Butterworth.  She continues to work in CV surgery.  His sense of duty was passed on to his three children – Eric, Jennifer and Andrea – who have served in the military and have become successful in and out of their military careers. His sense of love as a parent led him to donate a kidney to his son Eric when needed.  His sense of faith has continued a course for more than 40 years of singing in the church choir.

Acknowledgments: This biography was written by Steve Wilson, PA-C, with assistance from Mr. Munson and was submitted to the Society in May 2020. The photographs are also courtesy of Mr. Munson.  When using information from this biography, please provide the proper citation as described within the PA History Society Terms of Use. 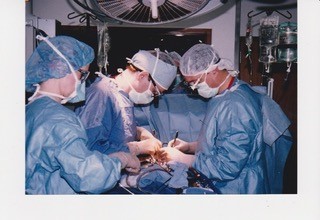 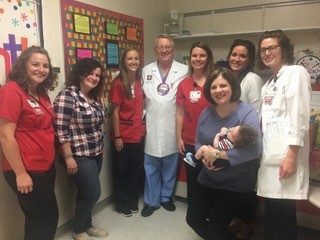