Joyce Nichols is the first woman to be formally educated as a physician assistant (PA). She also happens to be the first African-American woman to practice as a PA. Nichols was working as a licensed practical nurse (LPN) at Duke University when Dr. Eugene A. Stead, Jr. established his 2-yr PA educational program in 1965. She learned about the program from a former Navy corpsman who worked with her in the cardiac unit. The program was originally designed to build on the past experience and training of ex-military corpsmen. Thus, Nichols had to overcome a number of obstacles to gain entrance into the program. She was a woman; she did not have a corpsmen background; she was an African-American; and she had little money to pay for her education. However she was persistent and gradually won the faculty’s confidence and support. She entered and graduated from the Duke PA Program in 1970.

The curriculum was difficult but her male classmates were very supportive and accepted her into their ranks. In the middle of her first year in 1969, her house burnt to the ground; no one was injured, but she, her husband and children lost everything. To keep her from leaving school, her classmates and the faculty put on a dance, sold tickets and raised enough funds to replace her household items and buy clothing and Christmas presents for the kids that year. In return, Joyce worked hard and was vocal about things she felt needed to be changed, especially to improve the education of women in the medical field.

She was a student when the American Association of Physician’s Assistants (today known as the American Academy of Physician Assistants, AAPA) was established at Duke in 1968. As the first minority to serve on the AAPA Board of Directors, she advocated and took responsibility for establishing the AAPA Minority Affairs Committee, and chaired the committee initially. Overtime she became a matriarch and role model for African-Americans and other minorities in the PA profession.

Prior to graduation, Nichols met with Dr. E. Harvey Estes, Jr., the former chair of the Department of Community and Family Medicine at Duke University to discuss her future employment plans. White physicians were not sure how their patients would accept her in their practices, so she was exploring the possibility of working for a couple of local African-American physicians who had been her preceptors in the program. Dr. Charles Johnson, the first African-American physician to join the Duke faculty, was one of these individuals. When queried about what she really wanted to do, she told Estes that her dream was to establish a rural clinic in northern Durham County where she had grown up on a tobacco farm. Estes helped her secure the necessary funds for what became one of the first rural, satellite health clinics in North Carolina and the nation. She worked in the clinic until 1972. When external funding began to dwindle, she and Estes talked Lincoln Health Center, a historically black community hospital and clinic in Durham, NC, to take over the clinic. Nichols took a job at Lincoln and remained there until she retired in 1995. For a video of Ms. Nichols working in the rural clinic in the early 1970s, go to http://www.pahx.org/wmv/PAHHMI3.wmv.

Professionally, Nichols helped found and served on the Board of Directors of the North Carolina Academy of Physician Assistants. As a preceptor and adjunct faculty member of the Department of Community and Family Medicine, she taught many medical and physician assistant students over the years. She was inducted into the Duke University PA Alumni Hall of fame in 2002 for her concerns for poor people and her advocacy skills. As a private citizen she served as a commissioner to the Durham Housing Authority winning many legal concessions for tenants. She served as a member of the Board of Directors of the Durham County Hospital Corporation and the Lincoln Community Health Center. In 1991, Nichols received the prestigious Nancy Susan Reynolds Award for Advocacy and in 1996 she was named the AAPA Paragon “Humanitarian of the Year.”

Nichols passed away on July 29, 2012 at her home in Durham, NC. At her funeral, three of her close professional colleagues, John Davis, PA-C, Earl Echard, PA-C and Lovest Alexander, PA-C, paid tribute to her legacy as a pioneering physician assistant.

Acknowledgments:This Biographical Sketch was prepared by Reginald Carter, PhD, PA. The photographs of Ms. Nichols are provided courtesy of the Duke University Medical Center Archives and the Society for the Preservation of Physician Assistant History. The photo of Ms. Nichols at Lincoln was photographed by Charles Cooper for the Durham Morning Herald. This bio was edited in August 2012. 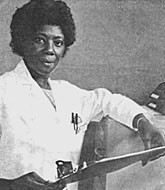