COL(R) Frank Piper attended Christian Brothers College Military High School, graduating as a First Lieutenant in the Junior ROTC Program.  Upon completion of high school, he attended the PA Program at the Bowman Gray School of Medicine of Wake Forest University. He was inducted into the US Army Reserve as a Warrant Officer in the early 1980’s.

He worked in a variety of military assignments to include:  the 325th General Hospital, 325th Field Hospital, 520th Military Police (MP) Battalion, and 7228th Medical Support Unit (with attachment to the 325th Combat Support Hospital).  Mobilized to Fort McCoy in support of the Global War on Terrorism, he became the Officer in Charge (OIC) of the Medical Support Team site 2003 to 2006.   He coordinated services for over 30,000 Army Reserve and National Guard Soldiers mobilizing, or demobilizing, for Kosovo Force, Operation Enduring Freedom, Operation Iraqi Freedom, and Operation Noble Eagle (ONE) contingency operations.  Additionally, he oversaw the care and management of over 500 soldiers assigned to the medical hold unit.  As the Deputy Chief of Clinical Services for the 325th Combat Support Hospital (CSH) from 2006 to 2009, and was responsible for the coordination of training and tracking of over 30 professionals (physicians and advance practice nurses) assigned/attached to the 325th who attend Battle Assemblies at four geographically distinct sites across the State of Missouri.  He achieved the rank of COL, and his last assignment was at the US Army Medical Department Center & School (AMEDDC&S) as the Army Reserve Chief Physician Assistant Consultant.

Piper’s civilian responsibilities from 1990 until his retirement in 2015 were that of Chief of the 202 bed Mental Health Residential Rehabilitation Treatment Program (MHRRTP) at the Department of Veteran Affairs Medical Center in Leavenworth, KS.  He was concurrently the Associate Manager of Behavioral Health for VA Eastern Kansas, Leavenworth Division, and the Veteran Integrated Service Network (VISN) 15 Homeless Coordinator.  He also served on the MHRRTP Field Advisory Board and VA Physician Assistant Field Advisory Board.

Piper holds a Bachelor of Science Degree in Education from the University of Missouri in 1973.  He graduated from the PA Program at the Bowman Gray School of Medicine of Wake Forest University, completed a Masters of Science Degree in Health Care Administration from Central Michigan University, and a Masters in PA Studies in Psychiatry from the University of Nebraska. He is recognized as a Distinguished Fellow of the American Academy of Physician Assistants, and is a 2007 Winner of the Veteran’s Administration (VA) Secretary’s Hands and Heart Award.

He is a Past President of the Society of Army Physician Assistants (SAPA), and has served on SAPA’s Board of Directors for many years, currently serving as the Director for Retired PAs.  In 2016 he was the recipient of the SAPA Robert Scully Memorial Award for his outstanding contributions to the organization.

Piper enjoys spending time with his loving family.  He continues to serve the US Army as a contractor, performing Periodic Health Assessments (PHA) and Post Deployment Health Reassessments (PDHRA) for US Army Reserve and National Guard Soldiers. He is also a member of the Greater Kansas City Coalition to End Homelessness, and on the Board of Directors for Kim Wilson Housing, a non-profit whose primary focus is providing innovative solutions to create affordable housing opportunities for vulnerable populations.

Acknowledgments: This biography was written by LTC Amelia Duran-Stanton, MAJ Patrick Walsh, and COL(R) Piper and was submitted to the Society in September 2017. Photographs are courtesy of COL(R) Piper. 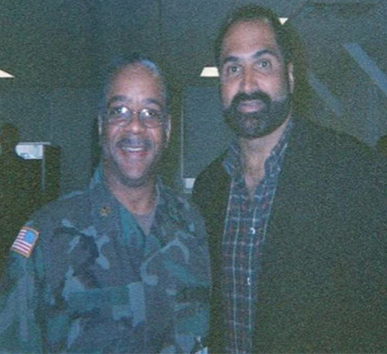