Lawrence M. Detmer served as Secretary of the Accreditation Review Committee on Educational Programs for Physician Assistants (ARC-PA) from 1972 to 1991 (when AAPA assumed responsibility for the administration of the ARC-PA). In this role he helped develop the initial policies and procedures used to accredit physician assistant programs based upon a set of “Essentials.” The “Essentials” were adopted by the American Medical Association’s (AMA) House of Delegates in December 1971 upon recommendation of several medical specialty societies composed of a sufficient number of physicians providing primary patient care.

Detmer wrote an article about the initiation of the accreditation process and the ARC-PA that appeared in the January 1973 issue of Physician’s Associate. The article is a historic record of early efforts of the AMA to establish accreditation standards for what at the time was a fledgling, diverse, and amorphously defined emerging allied health profession. Later, he worked closely with leaders in the American Academy of Physician Assistants and the Association of Physician Assistant Programs (later renamed the Physician Assistant Education Association) to gain recognition and eventually representation on the JRC-PA in 1974 and 1978 respectively.

He organized workshops to train medical clinicians and educators and physician assistants to be site visitors for the JRC-PA. He also helped develop a self-study guide for programs to use in preparation for accreditation review. He guided the JRC-PA through a number of important milestones including changes in organizational sponsors, the inclusion of surgeon assistant with the primary care assistant programs in the accreditation review process and the alignment of the JRC-PA with the AMA Council on Medical Education and subsequently, its successor, the Committee on Allied Health Education and Accreditation (CAHEA). He was very supportive in the name change of the committee to the Accreditation Review Committee on Education for the Physician Assistant (ARC-PA). The ARC-PA became a free-standing accreditation commission in January 2001.

Detmer was born in Winfield, Kansas in 1930. His interest in health care began at age 13 after his mother had had a number of surgeries and hospitalizations. This was prior to the advent of health and hospital insurance and loans were available only at 18% interest. His father (a roustabout) over time paid off all of the debt. Detmer decided he wanted to become a hospital administrator to help people circumvent the financial problems that befell his and many other families. He financed his own collegiate education tuition and fees. Upon transferring from Bethany College in his home town to the University of Kansas at Lawrence to complete his baccalaureate studies, he gained employment at the student health service on campus. The service resided in the Watkins Memorial Hospital, a 55-bed facility with a large outpatient service capacity for students and faculty. Upon graduating with a BS in administration in 1953 he was drafted into the US Army. He served as a company clerk from basic training to discharge in 1955.

Detmer returned to the University of Kansas after his tour of duty to complete a year of independent study. He subsequently initiated his studies in hospital administration at the University of Minnesota in Minneapolis. For the second year of this curriculum he was accepted at The Johns Hopkins Hospital as an administrative resident. He remained on the staff as an administrative assistant to three senior officers, including the president. For his final five years he held administrative responsibility for medical and surgical private and semiprivate inpatient services. During the time at Hopkins he found his interests shifting from administration to health policy. In 1965 he joined the staff of the American Hospital Association (AHA) in Chicago, IL. While there his focus was on hospital based community health services, ie, long-term care, home health care, physical rehabilitation care, community mental health services, and the emergence of community colleges into the education and training of technical personnel traditionally trained in hospital-based schools. He was also the AHA liaison with the NIH Regional Medical Programs that promoted new and expanded services for heart, cancer, and stroke care.

In 1971 Detmer was recruited by AMA to administer a newly awarded contract for the initiation of a program of accreditation for physician assistant education programs. Detmer was given a month to have the accreditation process up and running. He modeled the evaluation process on those used to evaluate postgraduate residency programs. Sponsor organizations of the PA accreditation review committee recommended clinical educators and practitioners as on-site evaluators. All existing programs filed applications for accreditation within the first year, were site visited, reviewed, and became accredited by AMA’s Council on Medical Education.

When AMA decided to end its involvement in the accreditation of non-physician education, Detmer facilitated the establishment of an independent accreditation organization for the allied health professions to replace the AMA’s CAHEA. Once the organization was formed and incorporated, Detmer left the AMA and became the first Executive Director of the Commission on Accreditation of Allied Health Education Programs (CAAHEP) in 1994. He held this position until his retirement at the close of 1998.

Over the years Detmer received a number of honors and awards for his pioneer effort and contributions to the PA profession from the American Academy of Physician Assistants and the Physician Assistant Education Association (formerly APAP). He continues to live in Chicago’s north shore (Wilmette and Evanston) and enjoys its many attractions.

Acknowledgments: This biographical Sketch was prepared by Reginald Carter with the assistance of Mr. Detmer and submitted to the Society on January 26, 2008. The first photograph is courtesy of Mr. Detmer and the second photograph is courtesy of the Duke University Medical Center Archives and the Society for the Preservation of Physician Assistant History. 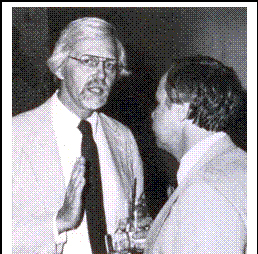