Dr. Alfred M. Sadler, Jr., MD, FACP, (1941- ) first became acquainted with the physician assistant concept on a visit from the National Institute of Health (NIH) to Duke University in 1968. He has been involved in some aspect of the PA world ever since.

In 1970, Dr. Sadler was appointed Assistant Professor of Surgery and Public Health and Director of the Yale Trauma Program by Dr. Jack W. Cole, Chairman of Yale’s Department of Surgery. During that year he founded and directed the Physician Assistant Program at the Yale University School of Medicine. He was ably assisted by Paul Moson, a graduate of the second class of the Duke PA Program. In 1972, he coauthored, “The Physician’s Assistant: Today and Tomorrow” with his brother, Blair, and associate, Ann A. Bliss, a nurse and psychiatric social worker. The book was an outgrowth of a “White Paper on Physician’s Assistants: Looking at the Future” which they prepared at the request of five foundations. The book addressed important policy issues relating to PAs and emphasized the importance of interdependence among health professionals.

Dr. Sadler served as the first president of the Association of Physician Assistant Programs (APAP, now PAEA) in 1972 – 1973. He played a key role in establishing the organization and worked with the American Medical Association and the Association of American Medical Colleges to develop accreditation standards for PA programs. He was instrumental in launching the first certifying examination for PAs by the National Board of Medical Examiners in 1973. With Dr. Thomas Piemme, he helped found the National Commission on Certification of Physician Assistants (NCCPA) in 1974 and obtained foundation support to open a national executive office in Washington, DC for APAP and the Academy of Physician Assistants (AAPA). Under his leadership, the first annual conference on New Health Practitioners (later to be named the annual conference on Physician’s Assistants) was held in 1973.

Dr. Sadler is a graduate of Amherst College, Amherst, MA in 1962 and the Drexel University College of Medicine, Philadelphia, PA. In 1967, after completing a Surgical Internship at the Hospital of the University of Pennsylvania, he joined the U.S. Public Health Service at the National Institutes of Health. He and his twin brother Blair, a lawyer, analyzed medical-legal issues including: the procurement and use of human tissues and organs for transplantation; the use of human subjects in clinical research; and the licensure and certification of allied health personnel. Together they helped draft the Uniform Anatomical Gift Act in 1968 which was adopted by all 50 states during the next three years and provides the legal underpinning for the national network of organ sharing that we have today. They also worked as special assistants to Dr. Roger O. Egeberg, Assistant Secretary for Health and Scientific Affairs, preparing a position paper on the credentialing of PAs and Nurse Practitioners. Dr. Sadler was a Founding Fellow of the Institute of Society, Ethics and the Life Sciences (Hastings Institute) in 1969.

In 1973, Dr. Sadler joined the Robert Wood Johnson (RWJ) Foundation, in Princeton, NJ, as a Senior Officer. At RWJF he worked to foster the training of physicians in primary care, encourage the further development of physician assistants, expand the Clinical Scholars Program, and enhance the field of emergency medicine. RWJF replicated the Yale regional EMS model in 44 areas of the country. The Physician’s Assistant: Today and Tomorrow was completed by Sadler, Sadler and Bliss in 1975 and published by Ballinger Press.

By 1976, Dr. Sadler’s clinical interests evolved from surgery to primary care. He completed an internship, residency and clinical fellowship in internal medicine at Massachusetts General Hospital and the Harvard Medical School, Boston, MA. In 1979, he was appointed the first chief of Geriatric Medicine at the Center for the Health Sciences at the UCLA School of Medicine and helped establish its geriatric medicine division.

In 1981, he left academic medicine for private practice on the Monterey Peninsula. During the next 35 years, he practiced general internal medicine in Monterey; established, with a PA, a health center for the underserved in Marina; served as Medical Director of a retirement community in Carmel Valley; directed an urgent care center in Salinas, staffed in part by PAs; directed the Employee and Occupational Health Department of the Salinas Valley Memorial Hospital; and precepted PA and nurse practitioner students from Stanford and San Jose State Universities.

As a regional and national leader in health policy, emergency medicine services, primary care and the PA profession, Dr. Sadler has received many awards and recognitions which include membership in Alpha Omega Alpha, the National Kidney Foundation’s Award for Distinguished Service, the Jack W. Cole award at Yale University, and membership in the Amherst College Copeland Colloquium. In 2014, Dr. Sadler received the Distinguished Service Award from PAEA. You may see a video of his acceptance speech here. He is an honorary member of the American Academy of Physician Assistants (1975). He is a Fellow of the American College of Physicians, a recipient of the Lifetime Achievement Award of its Northern California Chapter and one of 40 “Luminaries” selected by the Robert Wood Johnson Foundation at its 40th anniversary in 2012. He joined the PA History Society as a Trustee in 2009, serving as Historian in 2010-2011, and President in 2014. In 2018, he was recognized as “Physician of the Year” by the Monterey County Medical Society.

He is a coauthor with Thomas Piemme, and Ruth Ballweg of “The Physician Assistant: An Illustrated History,” (2013) supported by the grants from the Josiah Macy Jr. Foundation and the Robert Wood Johnson Foundation. In 2017 he cofounded a new MSPA Program at the California State University Monterey Bay where he also serves as Associate Medical Director. He is an active speaker at PA Commencements and White Coat ceremonies as well as a teacher of PA History at many PA Programs. He remains active in the fields of Bioethics and organ transplantation.

Acknowledgments: This Biographical Sketch was prepared by Dr. Alfred Sadler with the help of Dr. Reginald Carter. The portrait photographs are courtesy of Dr. Sadler. Additional photographs are from the PA History Society Photograph Collection. This biography was updated in September 2021. 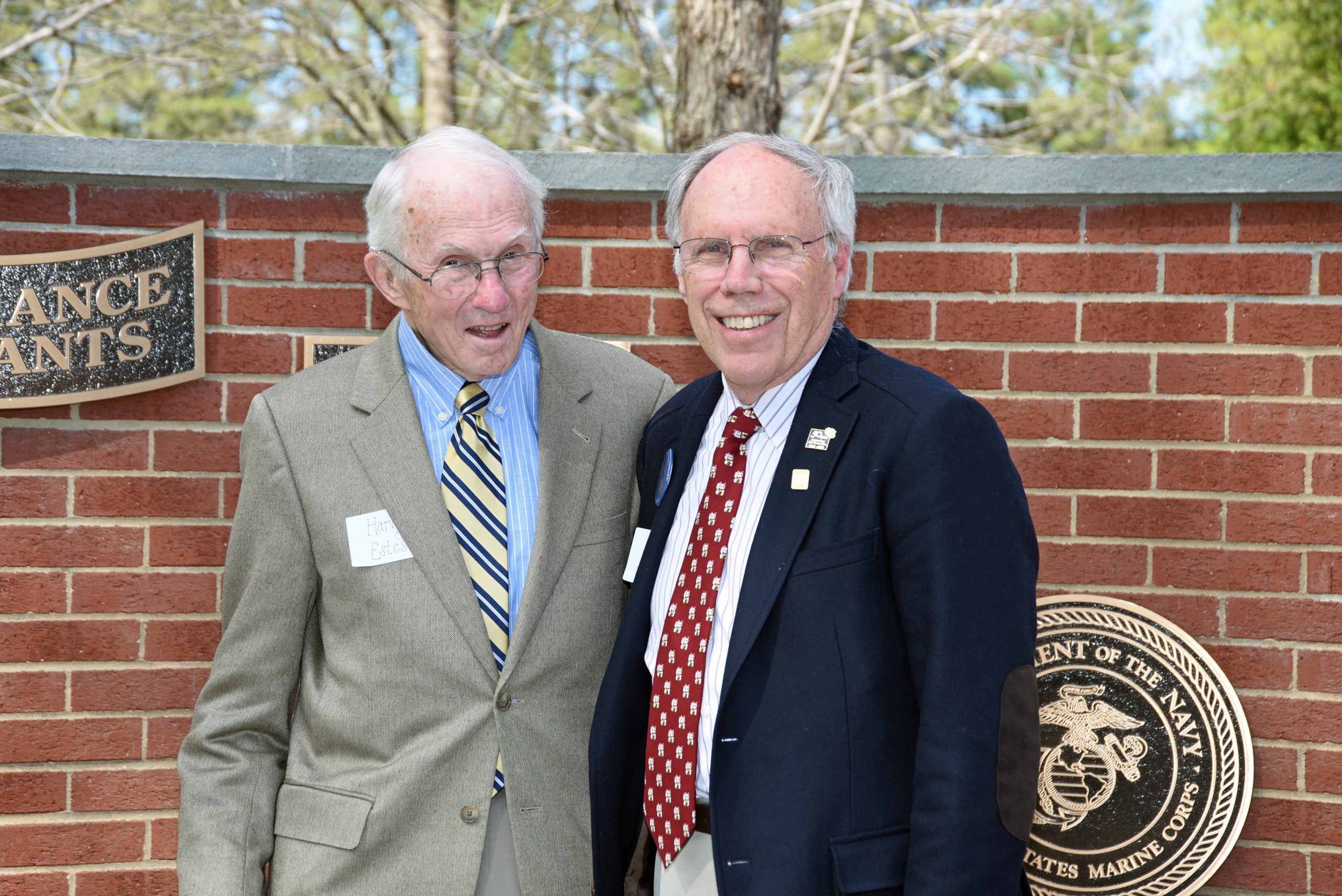 Harvey Estes and Fred Sadler at the Rededication Ceremony of the PA Veterans Garden, 2017