Throughout his undergraduate career, Mr. Schuman’s intention was to become a Unitarian Universalist minister, but the tumultuous 1960s led him to work as a community organizer in Mississippi and Illinois.  His first assignment included work at a free clinic in Freeport, Illinois, where interactions with the clinic physician kindled his interest in medicine.  A 1975 graduate of the Long Island University Physician Associate Program, Mr. Schuman practiced in rural Mississippi at the first African-American cooperative health center in the South – a site where he had trained laboratory workers prior to PA School.  He moved to Topeka, Kansas in 1976, where he joined a small family practice.  When the HIV epidemic began, Mr. Schuman became one of the first AIDS specialists in the community.

Mr. Schuman joined Kaiser Permanente Northwest’s Family Medicine Department in 1990, and with the development of its pioneering electronic medical record EpicCare (1997), he was appointed director of advanced efficiency training for the organization’s 1,100 clinicians.  Mr. Schuman served as Kaiser’s HIV provider in Salem, Oregon for ten years, and in 1997 was recruited by the Department of Neurology as a headache specialist.  He trained hundreds of Kaiser’s physicians, PAs and NPs in headache management.  As a result of his commitment to medical education, Mr. Schuman was presented with Northwest [Kaiser] Permanente’s “Excellence in Teaching Award” in 2009 – the first non-physician to ever receive the honor.

Interested in PA education throughout his career, Mr. Schuman first became a clinical preceptor for the Wichita State University PA Program in 1976, and after moving to Oregon, he precepted for Oregon Health Science University (OHSU) and Pacific University PA students.  He served as adjunct faculty at OHSU for ten years and continues to lecture and provide special assistance to students when needed.

Mr. Schuman became the first non-physician hired as faculty for the American Headache Society, and in that capacity, traveled the country for two years lecturing to physicians, PAs and NPs on diagnosis and treatment of headache disorders.  He continues to lecture regularly for the internal medicine residency at OHSU and has presented at over a dozen AAPA conferences on headache and other topics.

Active in the AAPA throughout much of his career, Mr. Schuman served on JAAPA’s editorial board for six years, and several more years on the Conference Education Program Committee.  He wrote a column called “Notes from the Northwest” which appeared regularly in JAAPA for three years during the 1990s.

At the State level, Mr. Schuman was named “PA of the Year” by the Oregon Society of Physician Assistants (OSPA) in 2006, and served as liaison to the Oregon Medical Board from OSPA for two years.  His election to the board of directors of the Marion Polk County, Oregon Medical Society in 2011 represented the first PA to serve in that capacity in the United States, and in 2014, the Medical Society presented him with the “President’s Achievement Award” for his outstanding service to that organization.

The author of over 100 articles in the medical literature, Mr. Schuman’s contributions on headache have appeared in JAAPA, Headache (The Journal of the American Headache Society), Consultant and other publications.  Having retired from Kaiser Permanente in 2012, his “Emeritus” Oregon PA license authorizes him to practice without remuneration, and he has volunteered at Salem Free Clinics since 2011, where he continues to practice internal medicine and neurology.  Mr. Schuman enjoys studies as a special student at a Unitarian Universalist seminary in Berkeley.

You may listen to an oral history interview Mr. Schuman gave the PA History Society on May 31st, 2018 by clicking here.

Acknowledgments: This Biographical Sketch was prepared by Mr. Schuman and he also provided the photographs. 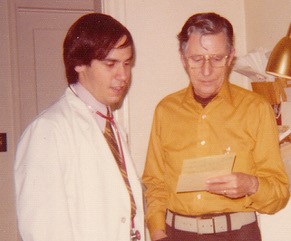