Mr. Vincent  Tenorio was drafted into the US Army on October 18, 1961 and attended basic training at Fort Ord, California.  During basic training Vince decided to shape his future Military Occupational Specialty (MOS) as opposed to having it selected for him. He discovered that is he enlisted in the Regular Army (RA) he could choose another MOS.  Consequently he enlisted and chose to become a Medical Specialist (Medic).  Vince attended Advanced Individual Training at Fort Sam Houston, Texas launching his long career in medicine.  Over his years as an enlisted Soldier, he went on to complete training as a laboratory technician, licensed practical nurse (91C), and dialysis technician; a highly competitive program selecting only four students each session.

In 1972 Vince learned the Army was establishing the Army Physician Assistant Program (APAP) and preparing to accept its inaugural class.  The initial cohort was exceptionally competitive with a large number of applicants.  With so many interested personnel the school administered a pretest to reduce the applicant pool.  This was followed by a two day selection process and panel held at Fort Sam Houston, Texas to further narrow down the number of students selected. Despite his heavy nerves, and worries for his pregnant wife, Vince performed exceptionally.  Two months later he was notified that he had been selected to APAP Class #001.

Vince’s first assignment as an Army PA was the 25th Infantry Division, Hawaii.  The Division Surgeon had little idea what to do with these new PAs.  They started by taking the place of physicians supporting various units on their training events and field exercises.  Soon, the Division Surgeon was taking requests from battalion commanders demanding PAs over doctors.

In many ways, PAs were preferred due to their prior military experience and skill sets they acquired as enlisted Soldiers.  This eventually resulted in PAs    being assigned directly to battalions, as opposed to hospitals and clinics. Vince  continued to serve as a trail-blazing Army PA during his follow-on assignments to Fort Ord, CA; the Republic of Korea; and Fort Lewis, WA.  During each of these postings Vince, and his classmates, continued to lay the foundation for all Army PAs to build upon.

Acknowledgments: This biography was written by LTC Amelia Duran-Stanton and MAJ Patrick Walsh and was submitted to the Society in September 2017. Photographs are courtesy of Mr. Tenorio. 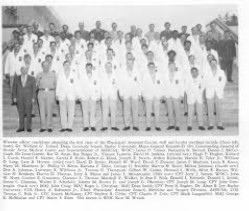