Dr. Thomas Zampieri is a graduate of Hahnemann University’s (Hahnemann became Drexel University College of Medicine in 2002) Physician Assistant Program, receiving his degree in 1978. As a PA in the Army National Guard, Zampieri was an activist for PA educational opportunities and scholarships for veterans. As a PA, he worked extensively with the Veterans Affairs Physician Assistant Association (VAPAA). He eventually became the president of the organization in 1991.

After losing his sight to a genetic, degenerative eye disease in 2001, Zampieri went back to school to receive his Master’s in Political Science from the University of St. Thomas in Houston in 2003, and then his PhD from Lacrosse University in 2005. After receiving his doctorate, Dr. Zampieri became employed as the National Director of Government Relations for the Blinded Veterans Association (BVA), a congressionally chartered veteran service organization. From then on, he dedicated himself to being an advocate and activist for veterans and their medical needs, especially those suffering eye traumas. He successfully fought for the establishment of the Military Vision Centers of Excellence and the expansion of the VA systems Continuum of Care for blind and low vision veterans’ programs.

Dr. Zampieri met his first physician assistant, Tom Hokinson, in 1972. Hokinson worked in a small family practice in rural Vermont and was a former Navy Corpsman and a Vietnam veteran. Zampieri was so struck by him and his work with his patients that he asked how he could become a physician assistant as well. Hokinson replied that most of the PA programs would not even consider someone unless they had been an Army Medic or a Navy Corpsman. Zampieri joined the Army later that same month. He served on active duty in the U.S. Army from 1972 to 1975 as an Army Medic. He entered Hahnemann University’s PA program as soon as his contract with the Army ended, and he graduated in June 1978. He entered the Army National Guard the same year – and served 22 years, retiring with the rank of Major. During this time, he was involved in several military medical training programs and schools, and was a graduate of the Army Flight Surgeon Aeromedical Course at Fort Rucker in 1989, and the AMEDD Advanced Officer Course at Fort Sam Houston Texas in 1992.

In the 1980’s, Dr. Zampieri became involved with many PA political issues, such as the right to practice, licensure, prescribing authority, and educational scholarships for students, especially among veterans. He worked as a clinical PA for over 23 years, 19 of those years within the Department of Veterans Affairs medical centers in Canandaigua, New York, Richmond, VA, and Houston Texas. During this time, Zampieri was co-author of several different medical journal articles on urology and spinal cord injury. He also has been interviewed for multiple news articles. He was a clinical PA instructor at Alderson-Broaddus College Department of Medical Sciences in West Virginia, and at Baylor College of Medicine, PA Program, in Houston, Texas from 1994 to 2001, and was appointed Clinical Instructor in the Scott Department of Urology while working in the Baylor College Surgery department.

During his 19 years in the VA, Dr. Zampieri assisted with the development of new PA clinical practice guidelines, recruitment and retention programs for career development and upward mobility, educational assistance for PA students, and encouraged academic affiliations with PA programs. He worked extensively on changes to the Title 38 Human Resources PA employment chapter in 1993, served as co-chairman for three national CME satellite teleconferences with joint VA and Department of Defense health care facilities, and was a member of the VA Physician Assistant Field Advisory Group from 1990 to 1993. He was appointed to the Institute of Medicine, National Academy of Science Committee on Department of Veterans Affairs Physician Staffing Requirements, and Non-Physician Practitioners Panel from 1990-1992.

Acknowledgments: This biography was written by Thomas Zampieri, PhD, with the assistance of Bradley Moore, a PA student at the time. It was submitted to the Society in July 2010 and updated by Ms. Schabowski in 2017. Photographs are courtesy of Dr. Zampieri. The photo in the banner was used as part of the 2000 AAPA Award Show when Dr. Zampieri was awarded PA of the Year. 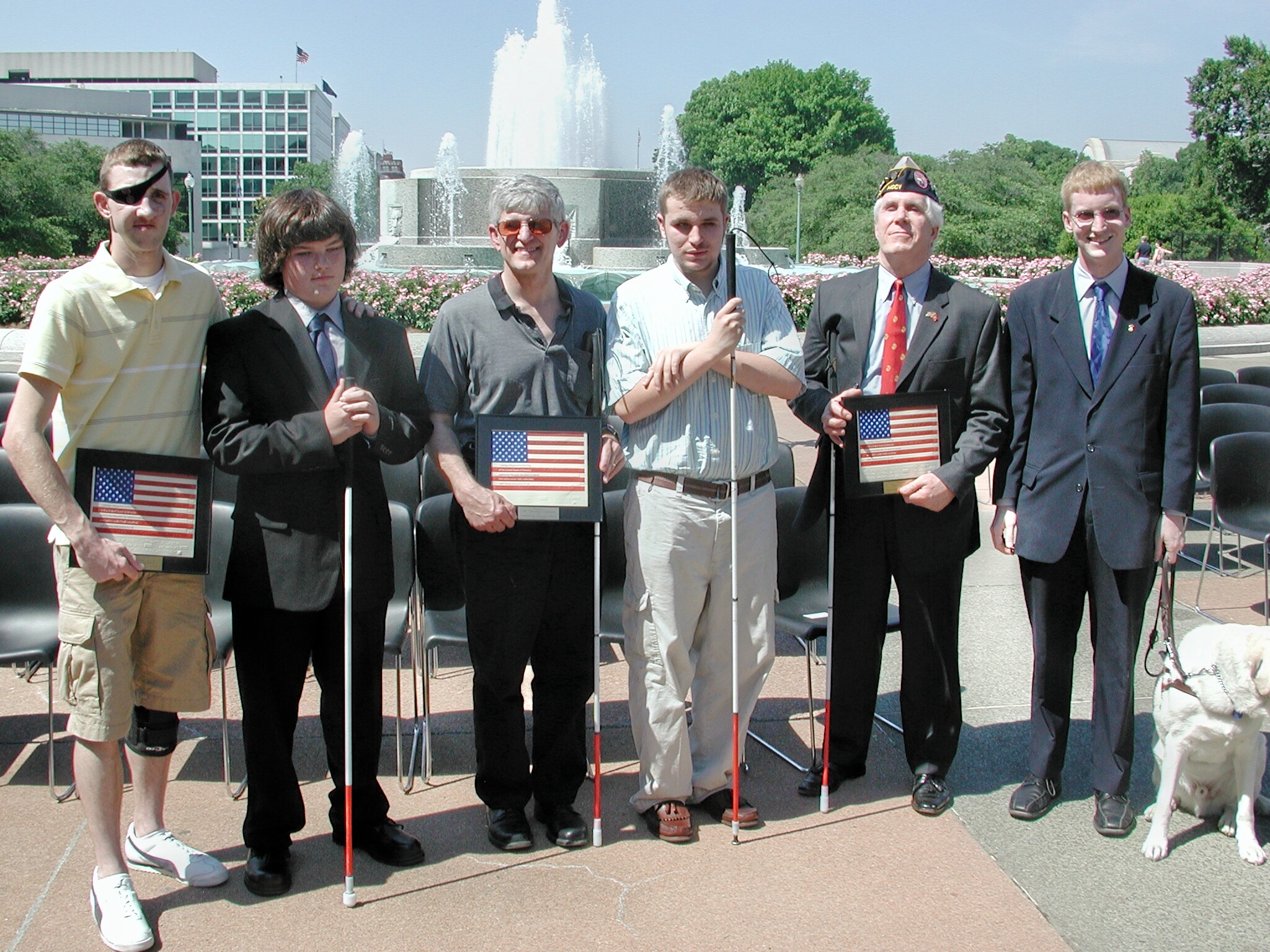 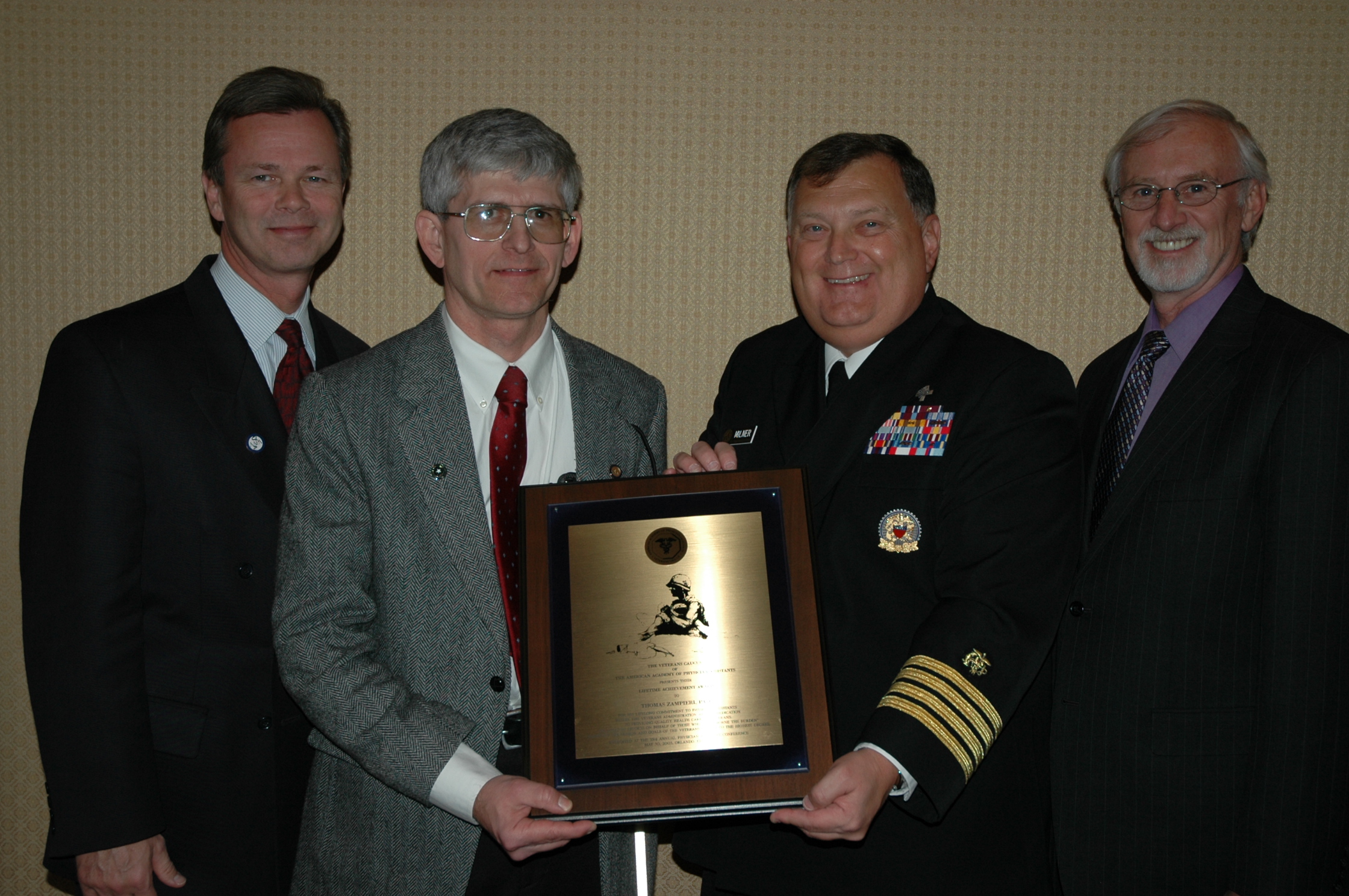 Dr. Zampieri being presented an award from the AAPA Veterans Caucus by Michael Milner.