Dr. Stead died on July 12, 2005. Soon thereafter, his family donated furniture, books, pictures and other artifacts to the Society to be used to recreate his lake home office within the Stead Center. The Society’s archivist, Mira Waller, and executive director, Reginald Carter, began immediately recreating the office based on photographs taken of the lake home office prior to Dr. Steads Death.

Photographs were replicated and hung to match their positions on the walls of the lake home office. Glass shelves were purchased to display medals, souvenirs and other artifacts donated by the family. Books were placed in a bookcase and the desk, chair and lamp were placed in the room; the desktop calendar with its entries left open to July 12th, the day Dr. Stead died.

Visitors to the Stead Center can view the office museum either through an open window in the lobby or through the doorway leading into the office.

With a generous gift from Ron Nelson, PA-C and past president of the Society, Reginald Carter designed and Mira Waller prepared shadow box exhibits honoring the founders of the PA Profession and highlighting the establishment of national PA organizations.

Thanks to Daniel McNeil, PA-C, the Oklahoma Academy of Physician Assistants provided funds to purchase display cabinets for the lobby. They arrived on December 28, 2006 and Reginald Carter and Adonna Thompson, who replaced Mira Waller as archivist, immediately began putting together exhibits to be displayed in the four cases. The displays highlighted artifacts from the museum, oral history, still and moving images collections; efforts to market the PA profession; the North Carolina PA Academy and the Oklahoma PA Academy.

Tim Egan, Vic Germino and Ken Harbert donated posters to the Society to have placed in the Eugene Stead Center. The posters include “Reflections” by artist David Ehlert, “God loves the Grunt” and “Life Savers then … Care Givers Now” by artist George L. Skypeck, Soldiers – Poem and “Veterans Caucus poster “Honoring Navy PAs – Memorial Day, May 31, 1999.” In September 2006, Adonna Thompson mounted the prints on the hallway wall near the Prentiss Harrison Resource Room and Alan Dippy, Preparator Nasher Museum of Art, Duke University, mounted letters above the prints to read “Reflections – In Honor of Those Who Served.”

The original statue was commissioned by Don Pedersen, director of the Utah Physician Assistant Program, and unveiled on the Utah campus in July 2003. After visiting the Stead Center in February 2006, Don spoke with leaders of the North Carolina Academy about having the statue recast and placed in the Center’s surrounding gardens. He and Kent Wallace, PA-C from Seattle took the lead in raising money from various PA organizations. A gifting ceremony was held on March 9, 2007 when the PA Foundation’s Board met at the Center followed by a more elaborate dedication ceremony on April when the weather was more suitable. The statue is titled Life savers then – Care givers now and was sculptured by John Prazen (1939-2003).

On November 11, 2008 the garden surrounding the combat medic statue was named the John McElligott, HM2 USN FMF PA Veterans Garden in honor of PAs who have served in the US Armed Forces and like him, served as medics who pioneered the PA profession. Dr. McElligott was honored for his contributions to the PA History Society when it moved its national office to the Stead Center in Durham, NC in 2005 when the new building was open and dedicated.

The PA History (PAHx) Society joined with the North Carolina Academy of Physician Assistants (NCAPA) in November 2015 to upgrade the John McElligott PA Veterans Garden located at the Stead Center. Professor Julie Sherk and her students at NC State University developed landscape designs that were used by Professor Sherk to prepare a final design concept. Myatt Landscaping Concepts, Inc. was hired to do the construction at a total cost of $72,000. The PA History Society conducted a year-long fundraiser which was highly supported by the PA community. As an additional funding source, name engraved pavers were sold to PA veterans and PAs on active duty in the uniformed services. 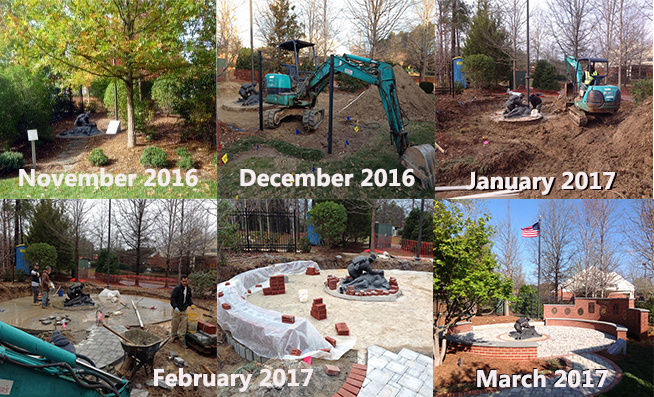 Work began in December 2016 to remove existing shrubs and plants, install a handicapped accessible walkway to the garden, build a patio surrounding the combat statue, lay a brick remembrance wall with bronze seals of the uniformed services and the Department of Veteran Affairs, construct two brick benches and install lights to enhance the statue and flagpole. The name engraved pavers were embedded into the patio surrounding the combat medic statue. For security, the garden was enclosed with a fence. 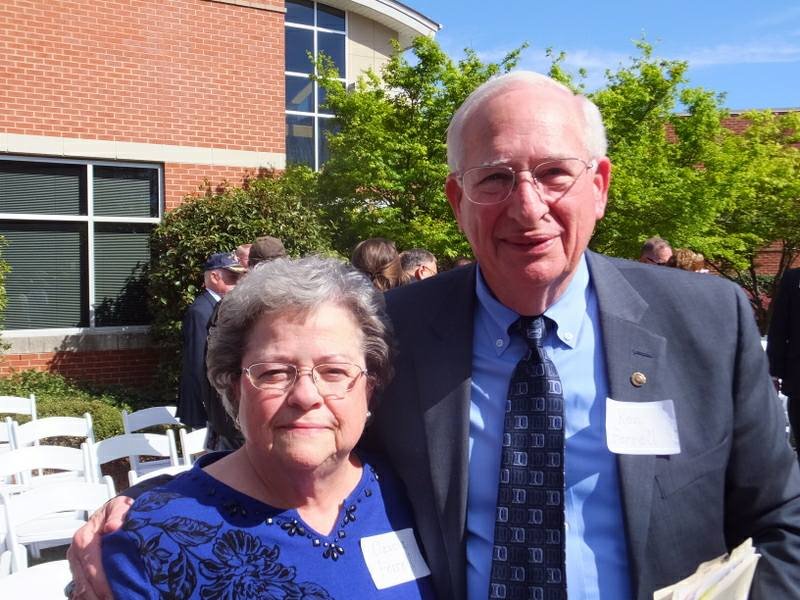 The updated garden was rededicated on April 8, 2017 to begin the celebration of the PA Profession’s 50th Anniversary. The last surviving member of the first PA graduating class at Duke University, Ken Ferrell, was in attendance, along with officials from the PAHx, the NCAPA, the AAPA, the NCCPA, the PAEA, the ARC-PA and distinguished PAs from around the country. Please click here to see photos from the event.

This garden is the only one in the United States to honor strictly military and uniformed services PAs. The PAHx Society is indebted to all those who donated to make the garden into a place of remembrance for those who have served their country. 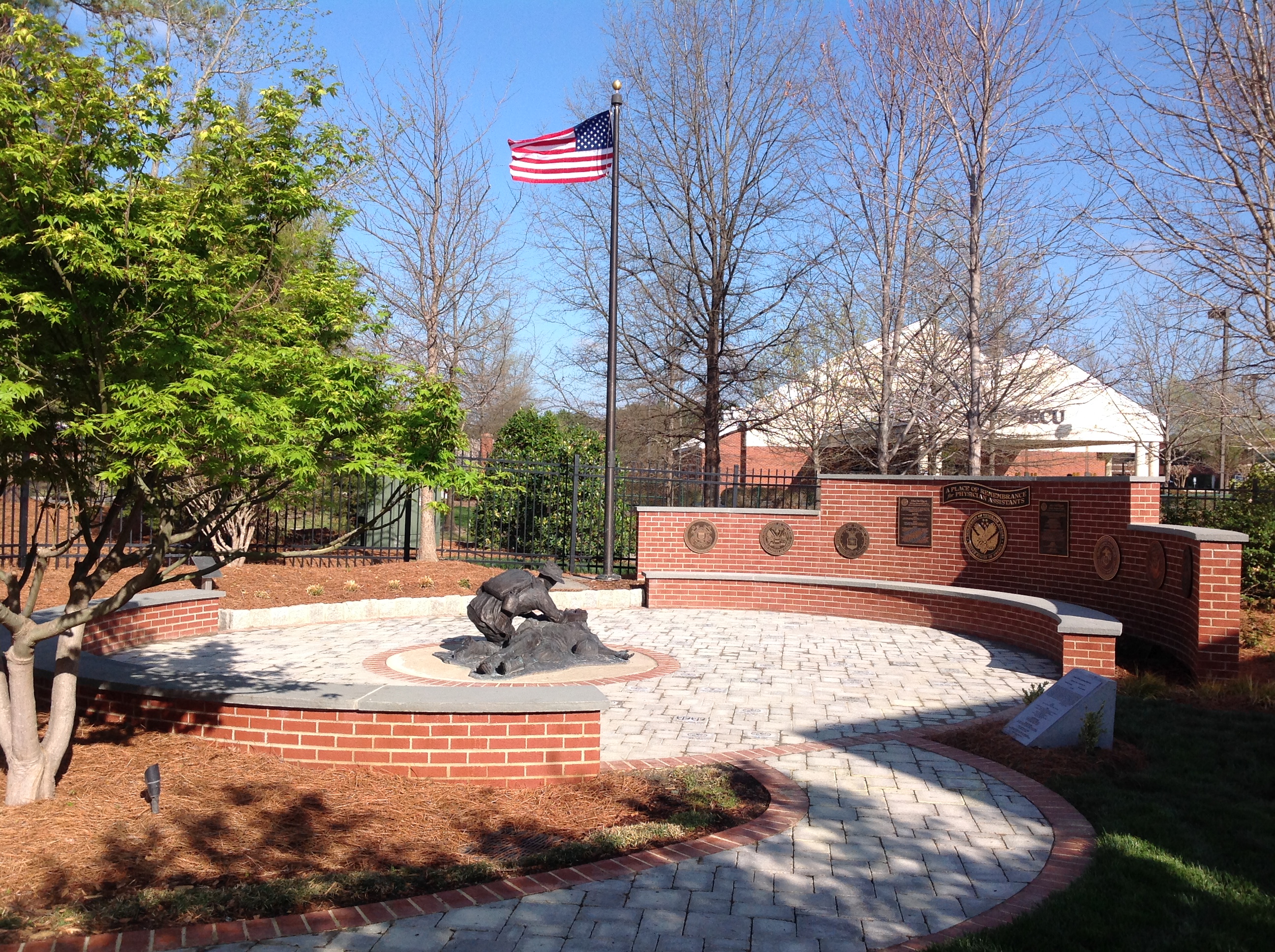