What do the Peace Corp and the University of New Mexico have in common?  Their slow response cost them a lifelong champion for their cause and a graduate that would be a tribute to their educational system.  Instead, Lynn Caton went on to graduate from the University of Nebraska PA program.  From there he went on to fulfill his desire to help thousands of people, educate hundreds of providers, and champion a profession.

Lynn Caton, PA-C, the 28th President of the American Academy of PAs (AAPA), grew up in the Cottonwoods of Nebraska.  Mr. Caton’s father worked as a mason and his mother was a veterinarian assistant.  It was from his mother that he obtained the tools and interest in biological science through the anatomical exploration of frogs, salamanders, and snakes.

In 1968, Mr. Caton entered Nebraska Wesleyan University in Lincoln, NE, where he majored in Biology.  Upon graduation, he received on-the-job training and began work as a respiratory therapist at Bryan Memorial Hospital.  When the hospital started a cardiac surgery program, Caton was trained to work in their cardiac unit as a therapist and a tech.  While considering future educational and employment options, he learned that the Nebraska Medical School started its first class of PA students.  He applied to the Peace Corps, University of New Mexico Graduate School for Neuroscience, and the PA program at the University of Nebraska Medical Center in Omaha, Nebraska.  The PA program provided the opportunity first and he accepted, graduating in 1975.

Upon graduation, Caton began his lifelong love for rural and family medicine practice.  In 1975, he worked with a National Health Service Corps physician, Dr. Ronald Lapp, in Curtis, NE.  As typical for these small rural practices, they covered emergency calls, nursing home patients, and minor trauma, in addition to the usual patient care.  It was here that the educational component of Caton’s career was launched with EMT and first responder education experiences and in-service instruction for nursing home staff.

HealthAmerica/Maxicare HMO in Lincoln, NE, made Caton an offer that included clinical practice in pediatrics and family medicine, Chief PA, Central Supply Supervisor, and Emergent Care Staff Supervisor. During this time, he continued to be a Clinical Instructor/Preceptor for the University of Nebraska Medical Center PA Program and served on their Admissions Committee.   While in Nebraska, he served two terms as President of the Nebraska Academy of Physician Assistants as well as multiple terms on the Board of Directors.  Caton connected the state organization with the AAPA by serving as a delegate to the House of Delegates.  In 1987, he saw the potential to have an impact beyond Nebraska.  He applied and was selected to be the AAPA Health Policy Fellow for 1987-1988.

Caton’s Health Policy Fellowship was during the 100th Congress and he served the Select Committee on Aging for the US House of Representatives, monitoring and helping to write legislation on health issues.   Some of the legislative experience allowed him to write preventative Medicare legislation and rural health legislation.  This included a rewrite of the Rural Health Clinics Act and the pilot program that eventually became the present laws on Critical Access hospitals.  Upon completion of the Fellowship, he moved west.

In 1988, Caton joined the McLoughlin Family Practice in Vancouver, Washington. He worked there until 1997 when he then joined Battle Ground Clinic in Battle Ground, WA.  In 2000, he joined the Family Medicine Department of the Oregon Health Sciences University Physician Assistant Program in Portland, OR.  This allowed him to assume roles such as Professional Development Coordinator, Associate Clinical Coordinator and Assistant Professor. Caton became the Associate Director for Clinical Education for the PA Program in 2002 and continued to serve in that capacity until his resignation in 2007. He then went back to full time clinical practice with Family Physicians Group until his retirement in 2012. During these years he also served the Washington Academy of Physician Assistants as Vice President and Director at Large.  He represented PAs on the State Rural Health Committee and was also liaison to the Washington Academy of Physicians.

Following Caton’s Fellowship in 1988, he went on to be the AAPA Professional Practice Council Chairman until 1994.  In 1995, he served as President-Elect of AAPA, then President from 1995-1996, and then Past President in 1996-97.  In his term as President, Caton championed House of Delegates officers in Board of Director activities and policy development.  He emphasized science and policy development as well as greater involvement in liaisons with other professional medical organizations.  From 1997 until 2002, he served as the AAPA representative to the American Academy of Family Physicians.

Whether meeting work responsibilities and professional challenges, climbing an ice face in the Canadian Rockies, or learning to sail a nine-thousand-pound keelboat, there are few challenges Caton was not prepared to meet.  Life for Mr. Caton has become even more enjoyable in retirement after 40 years in family medicine and nearly a decade in academia.  He and his wife Kate Yturri have retired to their dream home on Orcas Island off the coast of Washington where they continue to kayak, cycle, and sail.  He maintains ten acres of forest and half a dozen gardens and orchards.  During his free time, he also fly fishes and does wood carving.

Acknowledgments: This biographical sketch was prepared by Stephen Wilson with the assistance of Lynn Caton and was submitted to the Society in September 2021. Banner and sailing photographs are courtesy of Mr. Caton. All other photographs are from the PA History Society Photograph Collection. 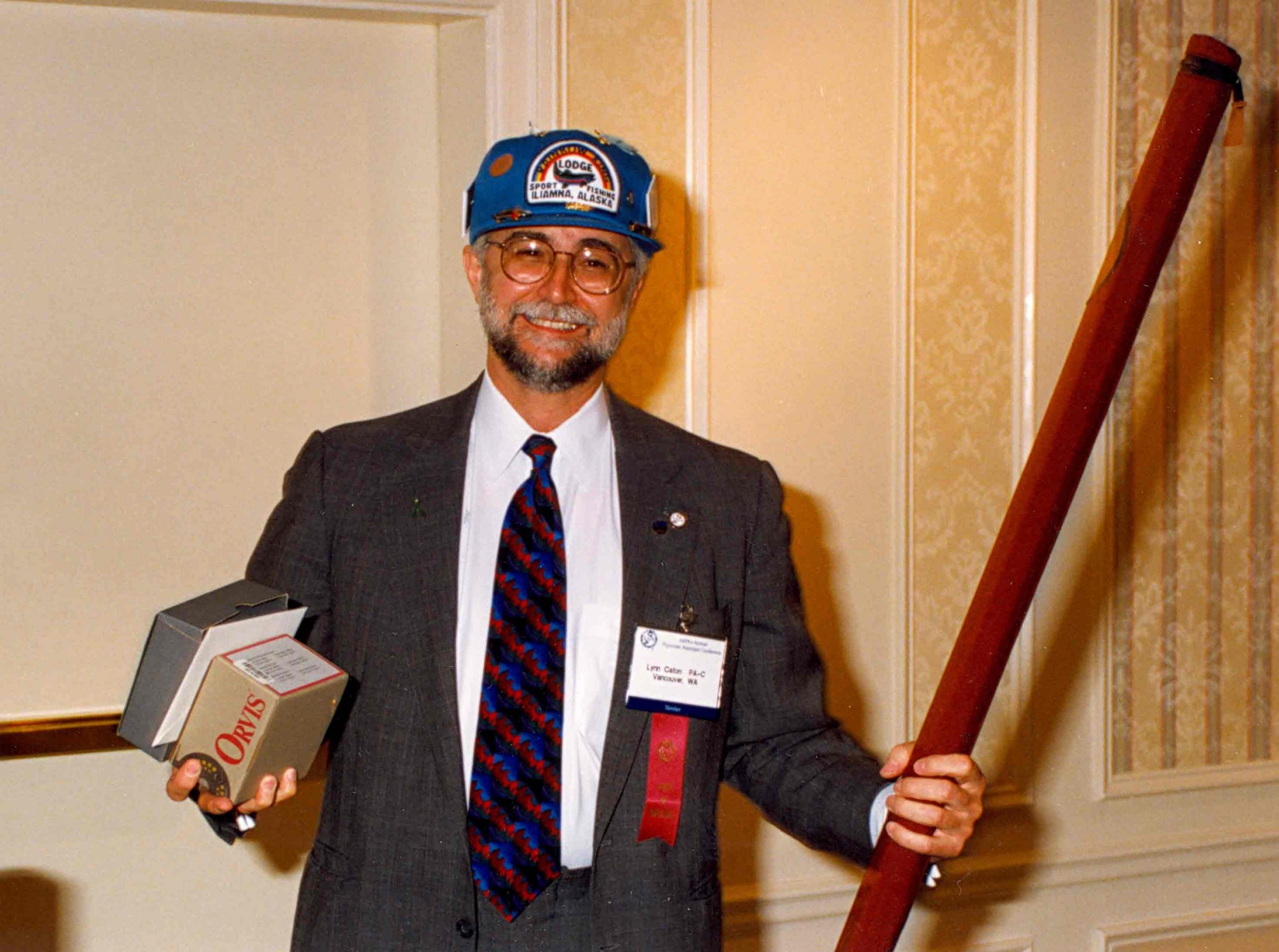 Lynn Caton with gifts at the AAPA Board of Directors meeting. New York Conference, 1996. 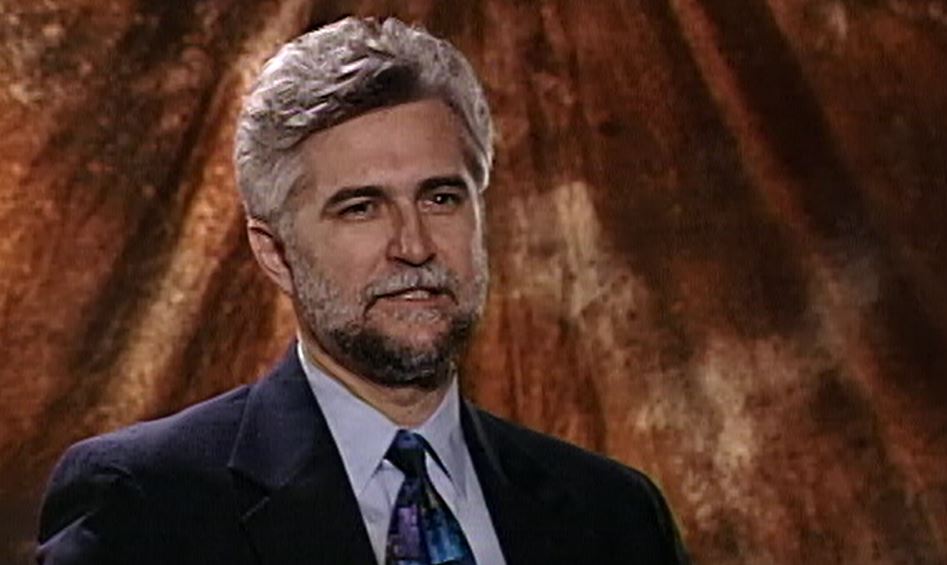 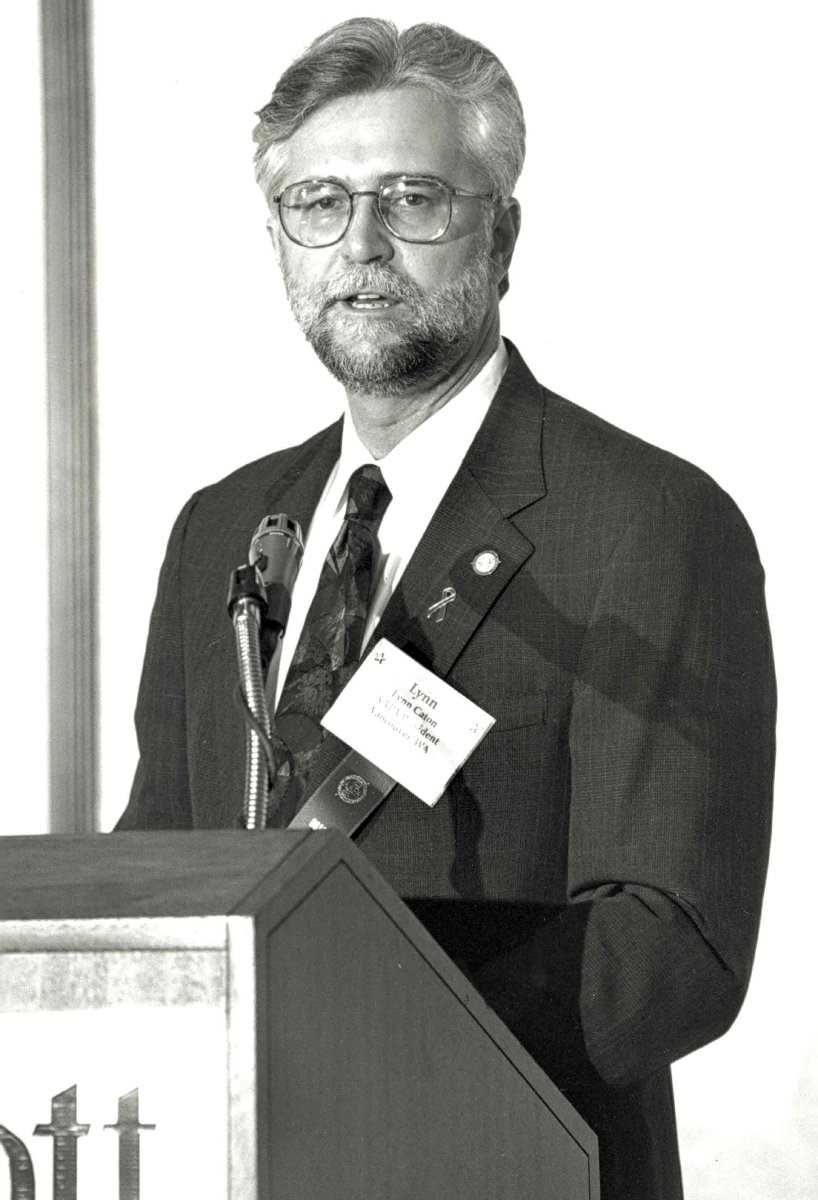 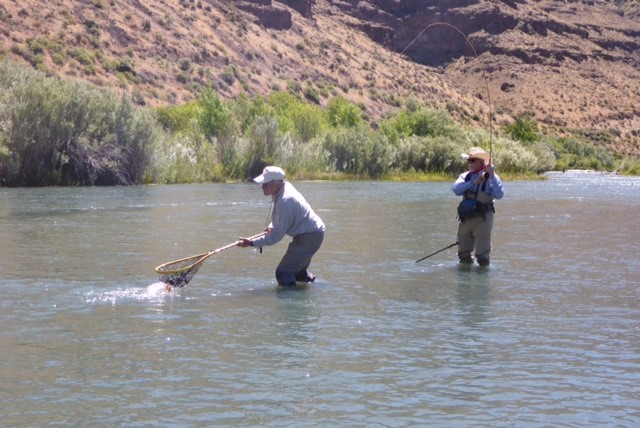