Sailor, jet mechanic, UPS driver, barber, nurse, executive, community volunteer, harbor master, columnist, and 15th President of the American Academy of Physician Assistants (AAPA).  Since his birth on January 22, 1943, Ron Fisher has not exactly chosen a life path typical to that of PAs today, but it certainly is one that exemplifies how professional success is a growth process.  As a PA, Fisher has distinguished himself as President of the Pennsylvania Society of Physician Assistants (PSPA) and President of the AAPA.  He championed the work of PAs as a Multispecialty Group Administrator (’83 – ‘93), Vice President of Western Region for the Geisinger Clinic system in Pennsylvania (’93 – ’95), Executive Director Clinic Operations NorthEast Medical Center in North Carolina (’95 – ’97) and Executive Director, Peninsula Regional Medical Group in Maryland (‘97 –08).  Fisher’s work has been recognized via the Pennsylvania Society of Physician Assistants Outstanding Service Award, The Upjohn Leadership Award, and the Geisinger Clinic Award for Leadership in Division Management.

Fisher and his sister were raised in Selinsgrove, Pennsylvania.  After his high school graduation in 1961, Fisher married his high school sweetheart, Shirl, and entered the Navy.  He was trained as a jet mechanic and left the service after four years.  Fisher worked a short time as a UPS driver but then decided to attend a barber school in Harrisburg, PA.  It was here that the study of head and face anatomy revealed his interest in medical studies.  Fisher was the only male student in his class at the Danville Nursing Program, and after graduation in 1968 he went to work at the Sunbury Community Hospital as an emergency room nurse.  Within a year he had accepted a position to work in the dialysis unit at the Geisinger Medical Center in Danville, PA.  As Fisher excelled, he was recognized for his knowledge and capabilities by being one of two nurses selected by Geisinger Medical Center to complete Geisinger’s PA certificate program in 1971.  Fisher worked clinically as a PA within the Geisinger system from 1972 until 1983 in emergency medicine and primary care.  He also served as a deputy coroner

Fisher was a key member of a group of dedicated PAs that led to the enactment of the Pennsylvania state statute recognizing PAs as a member of the medical community.  While serving as Secretary for the Pennsylvania Society of Physician Assistants, the Medical Practice Act of 1974 was amended to include physician assistants. Ron went on to serve as the Society’s 2nd President from ’79-‘81.  During this period, Fisher served as a consultant concerning PA issues to the Pennsylvania State Board of Medical Education and Licensure and as a consultant to the State Medical Society’s Committee on Health Manpower.

Fisher’s involvement with the AAPA began as Chief Delegate for PSPA at three House of Delegate sessions which included the first House meeting, held in Houston in 1977.  He began his Presidency of AAPA at the 10th Annual Physician Assistant Conference in 1982.   During his term Fisher said that he was most proud of moving the profession forward through developing relationships with regulatory bodies and professional organizations.  This included the AMA, American College of Surgeons (ACS), American Hospital Association (AHA), American Legion, and AARP.  Fisher says, “Working as the AAPA Liaison with the AHA to develop guidelines for the utilization of PAs was truly significant.  All of this occurred during a time when the continued integration of the profession within medicine was critical to its future.”

Fisher’s impact on the profession does not end with his involvement with the PA professional organizations.  By doing work for his community, Fisher has continued to be an example of what great assets PAs are to the health of patients and to the health of the community at large.  Fisher’s community involvement in Pennsylvania included being President of the Riverside Home & School Association (1972), member of the Riverside Borough Council (1972-1973), Exalted Ruler of the Danville Elks (1976), President of the Mifflin-Juniata United Way (1993), and President of the Mifflin-Juniata Chamber of Commerce (1994).  He also served on the Pennsylvania State Board of Osteopathic Medicine from 1992-1993.  In Maryland, Fisher served as President of the Ocean Pines Area Chamber of Commerce (2007-2008), President of the Worcester County Veterans Memorial Foundation (2011), and as a member of the Worcester County Department of Health Advisory Council.  Currently, Fisher continues to serve as a member of the Peninsula Regional Medical Center Health Advisory Council and to advocate for health care issues.  He sees the PA profession as the primary care provider of the future.  He believes that PAs will provide timely access, continuity of care, patient health education, and emphasis on geriatric care.  He has concerns about the current reimbursement policy for PAs and sees this as a potential issue in addressing the previously noted health care issues.  He is obviously not someone to sit idle.

Fisher’s “retirement” years are shared with his wife, Shirl, of over 56 years.  He works as the Harbor Master for the Ocean Pines Marina.  Fisher’s love of fishing allows him to contribute a monthly column for the Ocean Pines Courier Newspaper titled “Captain Ron’s Fish Tales”.  The Fishers have 2 children and 3 grandchildren.

Acknowledgments: This biography was written by Steve Wilson, with the assistance of Ron Fisher, and was submitted to the Society in September of 2018. Photographs are courtesy of Mr. Fisher. 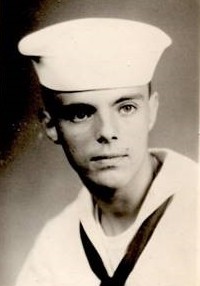 Ron Fisher in the Navy 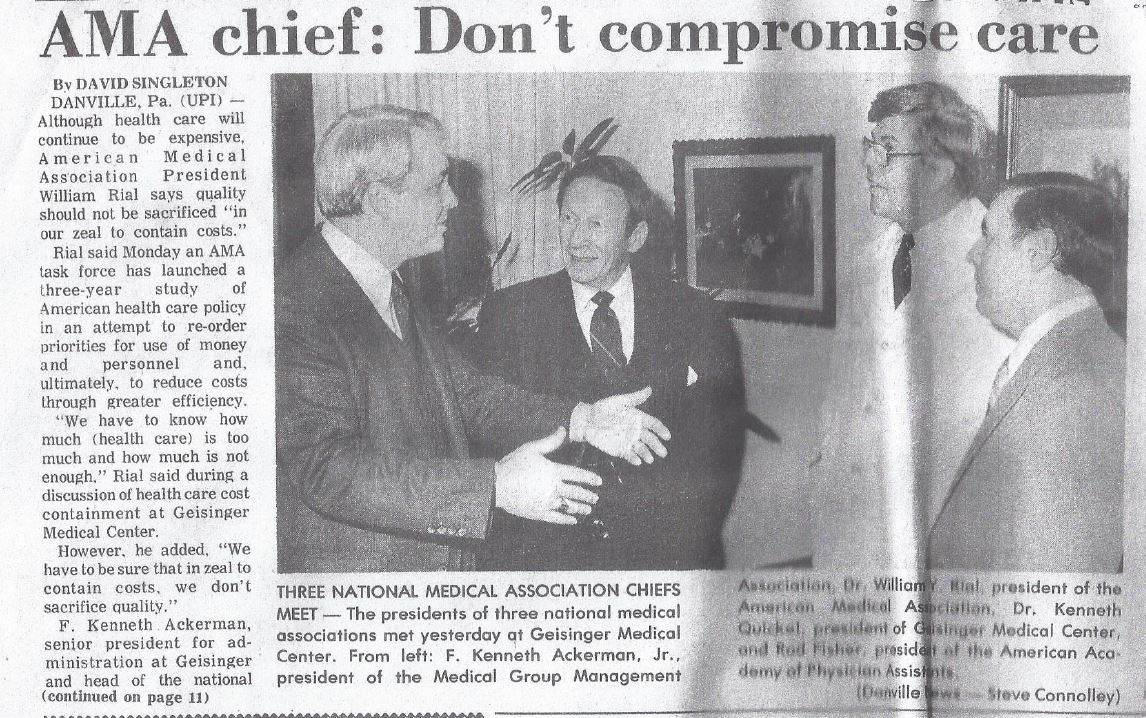 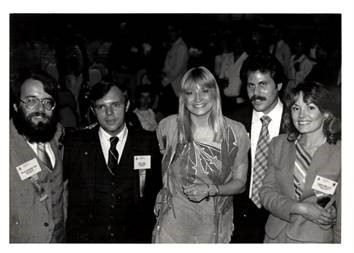 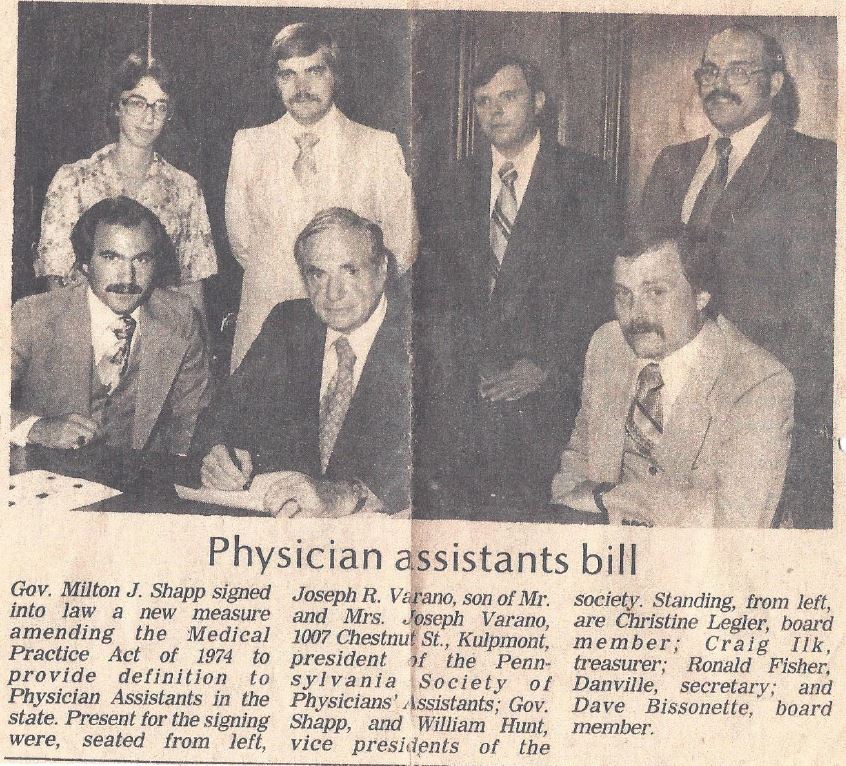