James “Jim” Hammond is a recognized PA educator.  A common focus of his career was the assurance and improvement of the quality of PA education.  He served as Secretary and Treasurer (1988-1992) and as President Elect, President and Past President (1994-1997) of the Association of Physician Assistant Programs (APAP, now PAEA).  He was a Co-developer and Co-Chairperson of Program Assistance and Technical Help, (PATH), a national service of APAP to promote and maintain excellence in PA educational programs.  Hammond also served as a Commissioner (2007-2013) and Chairperson (2010-2011) of the Accreditation Review Commission on Education for the Physician Assistant (ARC-PA).  For over thirty years, Hammond led or was a team member on accreditation site visits to PA programs.  He continued working with the ARC-PA as an independent contractor (2014-2018).  He has served as faculty at two PA programs; Western Michigan University, Kalamazoo, Michigan (1978-1997, Director 1985-1991)) and was the founding program director at James Madison University, Harrisonburg, VA (1997-2013).

Hammond grew up in small towns in southwestern lower Michigan.  During high school and college years, he held summer jobs on farms, in manufacturing plants, at an inner-city Community Action Center, and an inner-city neighborhood children’s activity center.  After college while working as a hospital-trained respiratory care technician, he needed to decide what to do in life.  He spoke with the only PA in Michigan at the time.  As in Robert Frost’s poem, he found two divergent roads – PA and medical school.  As in the poem, he chose the road less traveled by, and that made all the difference.   Hammond is married to Jean.  They have three sons, daughter-in-law, and two grandsons.

Hammond received a BA degree in philosophy from St. Francis Seminary, Milwaukee, WI (1968) and a BSM (BS in Medicine) from Western Michigan University (WMU), Kalamazoo, MI (1975).  After completing his PA studies, he worked full-time at the Daniel Boone Clinic in Whitesburg, KY (1975-1978), a town with less than 1,500 people nestled in the valley of the North Fork of the Kentucky River, five miles west of the border of KY and VA.  In 1978 he returned to Kalamazoo and joined the WMU PA program faculty.  This afforded him the opportunity to continue his education by completing a MA degree from WMU in educational leadership (1983).  While at WMU, he also served part-time as the Interim Manager of PA Services at the Butterworth Hospital, Grand Rapids, MI (1993-1994).  As a faculty member, Hammond continued to practice clinically part-time in various settings including the Family Health Center, Kalamazoo, MI, Veterans Administration Hospital, Battle Creek, MI and Otsego Family Physician PC, Otsego, MI.

Hammond taught many clinical courses in the PA curriculum for 35 years as a PA educator.  He has been a contributing chapter author for three editions of Ballweg’s A Guide to Clinical Practice published by W.B. Saunders Co. Philadelphia, PA.  His chapter titled “Education” relates the history and contribution of PA Education to the PA profession.  He also authored a chapter titled “Physician Assistants” that appeared in Chisolm’s Health Professions: Trends and Opportunities in U.S. published by Jones and Bartlett, Sudbury, MA.  Hammond has presented workshops on how to prepare for program accreditation, program development, grant writing, precepting, and on teaching PAs in community settings.  In recognition of his contributions to the PA profession, Hammond has received the William G. Birch, M.D. Society Award, for outstanding support for the PA concept and commitment to the improvement of education for students and program (1986), a Leadership Award from the Michigan Academy of PAs (1988), a  President’s Award, by the Association of Physician Assistant Programs (1996), an  Academy of Outstanding Alumni Award, inaugural inductee, Western Michigan University (2002) and the Physician Assistant of the Year Award, from the Virginia Academy of Physician Assistants (2013).

Hammond retired as a professor emeritus from James Madison University in 2013 and remains in Harrisonburg, VA enjoying hobbies and family. 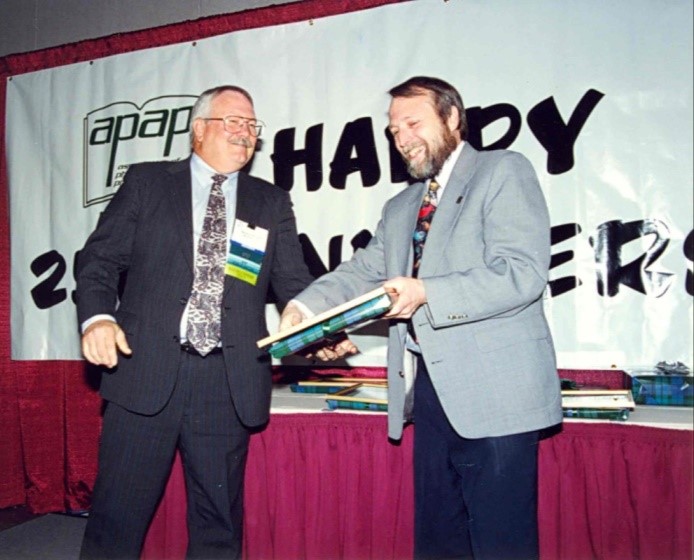 James Hammond receiving an APAP award from Dennis Blessing at the AAPA Conference in Minneapolis, 1997. 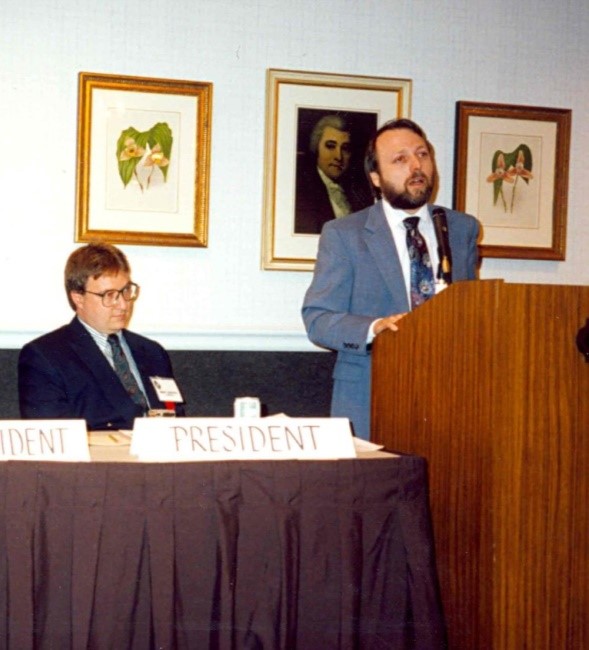