Bernard “Burn” Loeffke became a physician assistant after a very full career in the U. S. Army and the foreign service. He is a retired Major General who fought and was wounded in the Vietnam War, and who later served as Commanding General of the U. S. Army South.

Loeffke graduated from the U. S. Military Academy at West Point in 1957, earning a B. S. in Engineering, an M. A. in Russian Language and Soviet Area Studies, and a Ph. D. in International Relations. He taught Russian Language and Soviet Area Studies at the U. S. Military Academy, and also taught U. S. Foreign Policy at Georgetown University. On his path to becoming a general, Loeffke was an Army Ranger and a pilot. He commanded Special Forces, an infantry battalion, and was a paratroop advisor to Vietnamese units during the Vietnam War. He was wounded in Vietnam, received four Silver Stars, five Bronze Stars, and a Purple heart.

While in Vietnam, and throughout his career, the words of a sergeant under his command, Larry Morford, became an inspiration for him. When asked, Sergeant Morford said he opposed the war, but explained to then Lieutenant Colonel Loeffke that he chose to volunteer because “war is a beastly job, and the least beastly of us should be doing it.” Loeffke said he was forever changed by those words and by the combat death of this insightful man. It was in Sergeant Morford’s honor that he dedicated the Friendship Fund at West Point to inspire cadets to increase their understanding of Russian and Chinese relations.

After the Vietnam War, General Loeffke served as the Army Attache at the U. S. Embassy in Moscow, as a staff officer in the White House, and Director of the Commission on White House Fellows. In 1982, he became the first American Army General to serve in the U. S. Embassy in Beijing as Defense Attache. He learned to speak Mandarin in the following three years. His experience in China changed his view about the country and he began to advocate for the U.S. to treat China as a friend rather than an enemy.

In 1992, he retired from the military, and he turned his aspirations to medicine. Later, Loeffke heard of a young girl, Rachel Wheeler, who at the age of 9 helped fundraise to build a village and school in Haiti. Loeffke felt he could honor two men who personified what it means to give their lives on behalf of their fellow man in that same vein. He honored U.S. Army Sgt. Larry Morford and China’s Cpl. Lei Feng, a Chinese man who also lost his life in battle at age 22. He later dedicated a Peacemakers Community of Hope Village in the town of Spring Pass in St. Thomas, Jamaica, British West Indies, to both Morford and Feng. After discovering that then Secretary of State, Colin Powell, had family roots also in Jamaica, Loeffke dedicated a home in that village to Colin Powell.

Loeffke started his medical career when the program director of Nova Southeastern Physician Assistant Program, Maryann Ramos, invited him to join the PA profession. He completed his studies in 1997 and has participated in medical missions in war-torn or impoverished areas such as Bosnia, Haiti, Kenya, Iraq, Niger, Darfur, Sudan, and the Amazon. As a humanitarian, he continues to employ the skills he acquired in his medical training on relief missions in the world’s most daunting places. Loeffke received the President’s Distinguished Alumni Award from The U.S. Military Academy at West Point for his medical service in Africa in 2007.

Loeffke teaches public health, emergency medicine, and mediation as an adjunct professor at Baylor University and travels to China to give lectures at universities and research seminars. In 1998, Loeffke wrote the book, “From Warrior to Healer: 99 True Stories from a General to his Children”. Loeffke and his colleague, Carmen Queral, PhD, PA-C, co-authored the children’s book, “Wellness Magic: A Magical Way to Stay Healthy.” In 2012, Loeffke co-authored with his son, Marc, the book, “China, Our Enemy?” that recounts his 40 years of experience with China and espouses peaceful relations between the two countries. Additionally, Loeffke, his son Marc, and his daughter Kristina maintain a website called Helping Others Today (www.helpingotherstoday.com) that inspires support of causes important to them.

Acknowledgments: This biography was written by Maryann Ramos, MPH, PA-C Emeritus, with the assistance of Bernard Loeffke. Information for the biography was acquired through Bernard Loeffke’s entry on Wikipedia.org, the article Retired MAJ General Discusses War Prevention, an article from the LBJ Presidential Library’s Vietnam War Summit, and an article from the John Knoxx Village Gazette. The biography was submitted to the Society in October 2020. All photographs are courtesy of Mr. Loeffke. 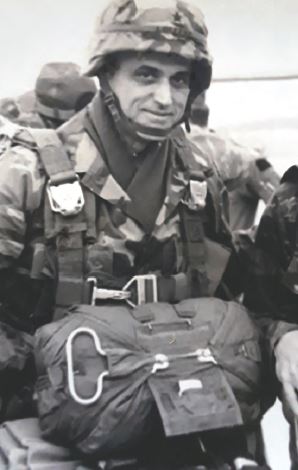