Benjamin Olmedo MMSc, PA-C is a Class of 2011 alumni of the Yale School of Medicine Physician Associate Program and earned a B.S. in Biological Sciences from California Polytechnic State University, San Luis Obispo in 2002. Olmedo completed his undergraduate studies through an R.O.T.C. Scholarship and was commissioned as a 2nd Lieutenant in the United States Army on the same day he earned his degree from Cal Poly less than a year after 9/11.

It was during his service in the Army that Olmedo received his first exposure to the PA profession while deployed to Iraq and Afghanistan. One fateful night, while on patrol along the Pakistan border, a scorpion stung the unit’s Combat Medic. The Battalion PA talked Olmedo through the appropriate actions to take over the radio. That night, Olmedo decided he was going to become a Physician Assistant.

As an Army leader, Olmedo distinguished himself through tenacity, teamwork and toughness while earning his airborne wings, Ranger tab and serving with the 173rd Airborne Brigade as well as helping to stand up a Brigade Combat Team with the 1st Infantry Division. He was awarded the Bronze Star, Army Commendation Medal, Army Achievement Medal and Navy Achievement Medal during his time in service as well as having the opportunity to compete in the 2008 Best Ranger Competition. In 2009, Ben transitioned from military service and translated his army leadership experiences into successful opportunities while completing his clinical training at Yale School of Medicine.

As a PA Student, Olmedo served as President of his class and the Jack Cole Student Society in addition to being selected as a Downs International Health Research Scholar through the Yale School of Medicine and a Paul Ambrose Community Health Scholar through the Association of Prevention Teaching and Research (APTR). He also served on the Board of Directors for the Student Academy, served as the student member on the Health Disparities Work Group and was awarded a Veteran’s Caucus Scholarship. Ben was also able to publish a number of papers in peer-reviewed journals to include: a Case Study on Dementia in Bilingual patients, a review on Sickle Cell Anemia and his international health research project on the prevention of postpartum hemorrhage in Peru.

As a PA, he built on his 7 years of active duty Army service by commissioning in the U. S. Public Health Service where he worked in rural Alaska for three years with the Indian Health Service. While in Alaska, Ben furthered his experience by serving on the Board of Directors for the Mat-Su Healthcare Foundation and was honored through both local and national recognition for building strong community relationships, improving patient outcomes and increasing utilization of clinic services. Ben served as President of the Public Health Service Academy of Physician Assistants from 2015 — 2016, serves on the Admission Committee for the Yale School of Medicine PA program and continues to serve with the US Public Health Service as a Lieutenant providing health care with the Indian Health Service in California where he loves to spend time with his daughter and wife having outdoor adventures, traveling and cooking.

Acknowledgments: This Biographical Sketch was prepared by Maryann Ramos with the assistance of Benjamin Olmedo and submitted to the PA History Society in June 2016. The photographs are courtesy of Benjamin Olmedo. The second photograph was taken during a patrol with Afghan National Army Soliders while in Afghanistan; Olmedo is on the right. The third photograph shows Olmedo checking in with an Elder during Elder’s Lunch while working in the Life House Community Health Center — courtesy of Alaska Dispatch News at: http://www.adn.com/health/slideshow/photos-chickaloon-health-and-wellness-center/2015/05/11/ 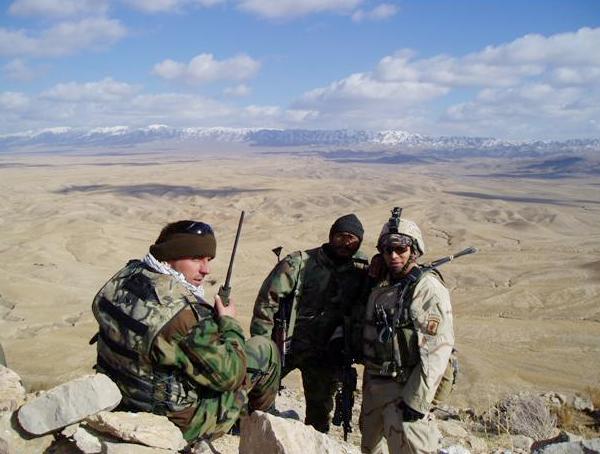 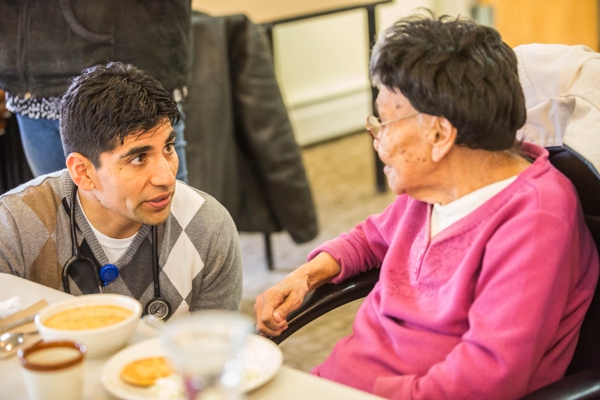