Although born in Mobile, Alabama, Sinback spent his formative years living in metropolitan Atlanta, GA. While attending West Georgia University, he enlisted in the United States Naval Reserves in 1970 and served on active duty as a Hospital Corpsman from 1971-1973.  While a hospital corpsmen, he became interested in the physician assistant concept.  After being discharged from the Navy, he moved to Durham, NC to work as a surgical care assistant on Nott Ward at the Duke University Hospital.  He was accepted into the Duke PA Program and graduated in 1976 with a BHS degree.

Soon after graduation, Sinback took a job in cardiothoracic surgery with the VAH and continued to practice within the VHA until his recent retirement.  During his career in the VAH, Sinback served on many advisory committees to help solve PA professional issues and develop PA practice guidelines.   As chair of the VHA Undersecretary of Health’s Multidisciplinary Practice Advisory Council, he helped develop and recommend policy on optimal utilization of PAs, Advanced Practice Nurses and Clinical Pharmacists in the VA.

While serving on the GAPA Board of Directors in 1981, Sinback directed a state-wide public education program on the PA profession in Georgia that counteracted political pressures to close the state’s two PA programs.  During his terms as president of GAPA (1982 and 1984), legislation was enacted that created a PA Advisory Standing Committee of the State Medical Board.  The Board was empowered to handle all PA professional practice issues.  The legislation also added PA membership to the State Medical Board.

Sinback has held many leadership positions within the AAPA.  He has served in the House of Delegates and on various professional practice, state legislation, and professional liability committees and task forces.  He has been a Trustee of the AAPA Education and Research Foundation.  As Chair of AAPA’s Subcommittee on State Legislation, Mr. Sinback developed a state legislative outreach program that included a constituent chapter state legislative grants program.  In 1985, he was awarded the first AAPA – Burroughs Wellcome Health Policy Fellowship allowing him to spend a year in Washington at the AAPA working on Medicare reimbursement legislation, researching PA medical malpractice issues and AAPA – constituent chapter computerization. He served as president of the AAPA in 1988-89.

Mr. Sinback served on the NCCPA Board of Directors off-and-on for 14 years; first as a representative of the AAPA and later as a representative of the Department of Veterans Affairs.  He has chaired many NCCPA committees and task forces and served as President and Chairman of the Board (1997-1998). During his term as president, the NCCPA underwent a complete reorganization and implemented a strategic planning process to define its mission and to serve its stakeholders.

For his many contributions to the PA profession, Mr. Sinback has received many awards and recognitions.  He was inducted in the Duke University Alumni Hall of Fame in 2002.

Acknowledgments: This biography was written by Reginald Carter and submitted to the Society on January 15, 2019. The first photograph was provided by Mr. Sinback while the banner, second, and third photographs are from the AAPA Photographic Collection, PA History Society, Johns Creek, GA.  Source of information used for this biography came from the Duke PA Program Alumni Hall of Fame biographies: https://cfm.duke.edu/alumni/hall-fame/marshall-f-sinback-jr-bhs-pa-c 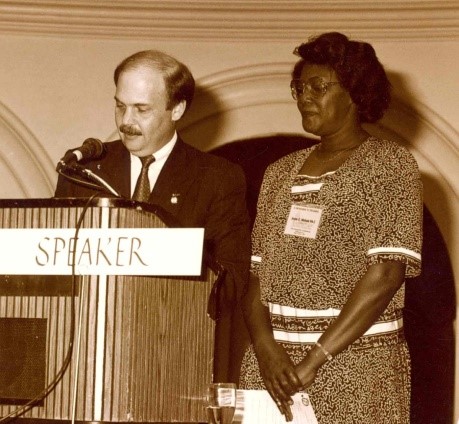 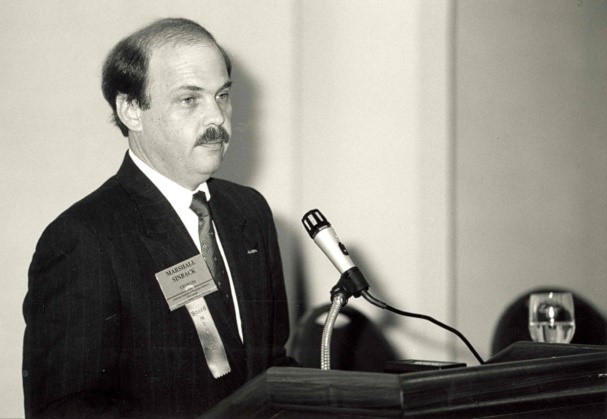 Marshall Sinback at a CCOW Meeting, 1987