William (Bill) M. Wilson was a pioneer. He, along with other like-minded individuals in the late 1960s and early 1970s, charted the course of a grand social experiment – the Physician Assistant (PA) profession.

Wilson served in the United States Army in 1961 and in the active Reserves for an additional seven years. He received his undergraduate and graduate degrees from the University of Utah culminating with his PhD in 1977.

In 1970, after a few years of working with Dr. Hilmon Castle at the Intermountain Regional Medical Center in Utah, they co-founded the PA Program at the University of Utah in the Department of Family and Community Medicine. Over his 32-year career at the program, Wilson actively pursued the teaching, research, and service missions of the University. He wrote prolifically. His many peer-reviewed journal articles, monographs, and book chapters helped define the PA profession in the early years and helped to celebrate its success as the decades passed. He also lent his editing skills to the review boards of many of our national journals.

While running the Utah PA Program as its founding Director, he took a lead role in helping to establish a funding stream from the federal government through the Bureau of Health Manpower in the Department of Health, Education, and Welfare to promote the fledgling PA profession. Working closely with the Honorable Paul G. Rogers, United States Congressman from the state of Florida, with Dr. Castle, Dr. David Sundwall and Dr. Richard Smith, he left an indelible mark on the funding of PA education and the promotion of the PA profession within the American health care system.

Along with Dr. Smith, he was active on a national level in helping coordinate the consortium of MEDEX PA programs. He also contributed substantially, in the formative years, to the development of the Association of Physician Assistant Programs and he fostered the growth of the National Commission on Certification of Physician Assistants along with its Executive Director – David Glazer. So, not only was Wilson instrumental in securing funding for all developing PA programs across the country, he had the foresight to tend to the professional and regulatory needs of this new profession.

His expertise was sought after not only by Congress, but also by many other national organizations, and with his giving nature he provided consultation to groups such as:

He even explored the PA concept internationally through USAID and was a consultant to: Pakistan, Thailand, and Guyana.

Closer to home he worked with the Utah State Medical Association, the State Legislature, and the then Governor of Utah, Calvin Rampton, to write the original PA Practice Act to assure that PA graduates could work alongside their supervising physicians to extend needed medical care to the citizens of Utah.

Throughout his career many local and national groups recognized Wilson for his pioneering work. These include:

In 1988, Wilson created a scholarship to fund students who were training in underserved rural areas in the intermountain west. In 1994, he obtained enough financial support from a number of different sources to endow this scholarship. Upon his retirement in 2003, it was named the Dr. William M. Wilson Underserved Areas Scholarship.

Wilson had a real knack for bringing people together for the benefit of the profession. A prime example was the development of a Model Clinical Therapeutics Curriculum for PA programs. Bringing together representatives of seven prominent universities, he created a document and a process that proved invaluable to PA programs across the country and is still in use today.
Retiring from the University of Utah in 2003 as a tenured associate professor, Wilson was designated with Emeritus status.

Acknowledgments: This Biographical Sketch was prepared by Donald Pedersen, PA-C, Ph.D, and the PA History Center staff. It was submitted to the Society on January 12, 2010. Also available is an oral history interview conducted by Ruth Ballweg in 2003. For more information, please contact the PA History Center. The banner photograph is courtesy of the PA History Society. Dr. William Wilson (right) talks with Dr. Hilmon Castle at 1978 AAPA conference. 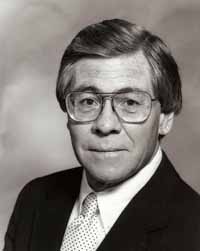 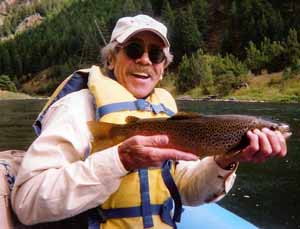