Dr. E. Harvey Estes, Jr. was appointed chairman of Duke University’s newly created Department of Community Health Sciences in 1966. A year later, he was asked to assume responsibility for the physician assistant (PA) program established by Dr. Eugene A. Stead, Jr. in the Department of Medicine. Estes inherited the program about the time the first three PA students were finishing their 2-year training program in 1967. He took steps immediately to evaluate and promote the training and use of physician assistants in North Carolina and the nation. With the addition of a postgraduate family medicine division in 1970, the Department’s clinics became a training ground for MD/PA health care teams. The Department recruited and trained community health workers from impoverished communities and helped established rural satellite clinics in these communities staffed primarily by PAs. He wrote articles, chaired or served on advisory committees and traveled extensively to promote the concept to anyone who would listen. It was Estes’ resilience and fortitude that brought Stead’s vision to fruition in the 1970s and 1980s.

Dr. Estes was born in 1928 in Gay, GA, a small rural community located 50 miles south of Atlanta. He received his undergraduate and medical degrees from Emory University in Atlanta in 1944 and 1947, respectively. After completing his internship year at Grady Memorial Hospital, he spent a year as a research fellow in the Department of Physiology with Dr. Robert P. Grant, a distinguished cardiologist and cardiovascular physiologist who helped establish the National Heart Institute. Another year of residency was followed by another year of research at Emory with Dr. James V. Warren, a renowned cardiologist who later became Chair of Medicine at Ohio State University. Estes’ second stint in the laboratory was interrupted when he was called to active duty in 1950 during the Korean conflict. After two years in the Navy, he decided not to return to Grady Memorial Hospital and Emory but to finish his residency at Duke University. Estes was acquainted with Dr. Stead, a cardiologist, who had left Emory in 1947 to chair the Department of Medicine at Duke University. He remained at Duke after completing his residency and quickly rose in academic rank from an associate in 1954 to a professor of medicine in 1961. It was during this time that he became recognized as an outstanding cardiologist and cardiovascular physiologist in electrocardiography. He served as the president of the North Carolina Heart Association in 1965.

Although an internist with a brilliant career ahead of him as a cardiologist, Estes seized the opportunity to use the resources at Duke University, a tertiary care medical center, to help solve a growing disparity in the delivery of primary and preventive health care services to Americans living in socioeconomic depressed communities. Growing up in a community of less than 150 people, he was acutely aware of the need to extend health care services out to these isolated communities. He quickly assembled a multidisciplinary team of physicians, nurses, lawyers, health policy advocates and laypersons to map strategies necessary to introduce the health care team concept into American Medicine. He hired a young generalist physician, Robert Howard, as chief of the PA education division. Together they held a series of conferences at Duke University between March 1968 and April 1972 to promote the PA concept. The first two  conferences focused on curriculum development and ways to establish new PA programs. The third conference solicited the leadership of organized medicine to set accreditation standards for PA education and to develop national certification through standardized examinations and continuing medical education requirements. The fourth conference drafted model state laws to enable physicians to use PAs in their practices. Dr. Estes played a key role in helping the first graduates and students of the Duke PA Program establish in 1968 what has become the American Academy of Physician Assistants. The Academy has recognized him and sought his advice and direction on many occasions since then.

In the 1970s, he turned his attention to the growth and development of family medicine residency programs and to the promotion of preventive medicine. He has served in both state and national leadership positions. As a leader of the NC Medical Society and the NC Institute of Medicine, he built a coalition of health professionals dedicated to training and placing family physicians, PAs and nurse practitioners into medically underserved communities. Nationally, he chaired the AMA’s Council on Scientific Affairs; served as president of the Association of Teachers of Preventive Medicine; chaired the Institute of Medicine, National Academy of Sciences’ Steering Committee for A Manpower Policy for Primary Health Care; and served on the Board of Directors of the Society of Teachers in Family Medicine.

Dr. Estes relinquished his chairmanship of the Department of Community and Family Medicine in 1985 but remained in the Department as chief of the family medicine division and later as head of the division’s geriatrics section. He retired from Duke in 1990 to become the founding director of the North Carolina Medical Society Foundation’s Community Practitioner Program. A program designed to increase the number of health care providers in the state’s underserved areas. He remained involved with the program until 2000 when he retired to spend more time with his wife, Jean Anderson Estes, their five children and twelve grandchildren.

This Biographical Sketch was prepared by Reginald Carter, Ph.D, PA. The photographs of Dr. Estes are provided courtesy of the PA History Society. 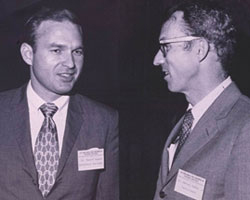