From the 1940’s until his death in 1975, Dr. Johnson (1908-1975) personally trained and used a “doctor’s assistant” in his rural general medical practice in eastern North Carolina. This prototypical MD/PA practice influenced Dr. Eugene Stead, Jr.‘s decision to establish a formal education program for physician assistants (PAs) at Duke University in 1965. The assistant’s ability to take care of routine medical and surgical tasks with minimum supervision and to keep the practice open while the physician attended medical seminars and meetings were reasons cited by Dr. Stead to train a “new type of clinical support personnel for physicians.” Without his assistant, Buddy Treadwell, Johnson would not have been able to lead the American Academy of General Practitioners during intricate times and to champion the establishment of Family Medicine as a specialty during the 20th century.

Johnson was born in Garland, NC on June 5, 1908. After graduating from the Blue Ridge Preparatory School near Charlottesville, VA, he attended Duke University in Durham, NC serving his senior year as president of the student body. Following two years of medical education at the University of North Carolina at Chapel Hill, he transferred to the University of Pennsylvania to complete his medical training in 1933. He returned to Garland, NC to open a general medicine practice in 1934 after completing a year’s internship at Jackson Memorial Hospital, Miami, Florida. He continued to practice in Garland until his death on April 23, 1975. His wife, Mary Porter Allan Johnson, affectionately called “Monk,” helped manage the practice and encouraged his professional involvement in state and national health care affairs.

Early in his career, he became involved in his local and state medical societies – eventually being selected as president of the NC Medical Society in 1959. The Society appointed him as a delegate to the then American Academy of General Practitioners, and after eight years serving as a delegate, he was appointed to the Academy’s Board of Directors and chosen to chair the body during his term. In 1964-65, he became president elect of the Academy and served 18 months as its president, longer than any other person. It was during this time that he was also appointed to the Board of Trustees of the University of North Carolina. While leading the Academy, he became active in the development of quality standards for hospitals as a member of the Joint Commission on Accreditation of Hospitals (JRCH). The 1960’s were volatile times; the numbers of general practitioners were declining at an alarming rate; Medicare legislation was enacted by Congress; and there was a growing unrest among the general population, a call for civil rights reform, the end of an unpopular war, and demands for greater access to public health care services.

Johnson and his assistant, Henry “Buddy” Treadwell, were featured in an article that appeared in the May 15, 1967 issue of Medical Economics about the use of non-doctors to do doctor’s work. The article described the close working relationship between Johnson and Treadwell, the scope of Treadwell’s duties, and his acceptance by patients and the medical community. The author concludes the article by observing that “By having someone he (Johnson) can trust to coordinate patient care when he is away, he feels free to spend more time at medical meetings or participating in activities of organized medicine” and quotes Johnson as saying, “I don’t know any other way a doctor is going to get significant amounts of time for himself.”

In a memoriam that appeared in the Journal of Family Medicine in 1975, Dr. Lotterhos, chair of the Department of Family Medicine, Medical College of Georgia, states that “by this time (the 1960’s) Dr. Johnson was already becoming a legend and in my opinion, could well wear the title of a “Paul Revere of Medicine … (taking) time to share his information with those who were too busy with their professional duties to pay much attention to what was going on outside their daily lives.” He was appointed by governors of North Carolina to serve on six health advisory groups for the state. Johnson’s zenith in Washington came in 1970 with the passage of the Family Practice Bill to increase the numbers of primary care physicians being trained within the United States and the establishment of family medicine as a medical specialty.

Back in his home state, Johnson championed and lobbied hard to establish a medical school at East Carolina University in Greenville, NC to train primary care physicians. The proposal was first raised in the NC General Assembly in 1965, but a full four-year program at the school was not approved until 1974.

A pioneer of the American Board of Family Practice (ABFP), Johnson became its president in 1973. He also served as an advisor to the then American Association of Physicians’ Associates (AAPA). In accepting this latter responsibility, he indicated that it would give him great pleasure to serve “since the … physicians’ assistant has been a long time dream and reality for me.”

In a resolution of condolence adopted by the American Academy of Family Physicians upon his death in 1975, it was noted that “he gracefully wore the mantle of leadership in all his endeavors and served as a model of the true and complete physician.”

Acknowledgments: This Biographical Sketch was prepared by Reginald Carter, Ph.D, PA and Mira Waller, MLS for the Society for the Preservation of Physician Assistant History. The photographs of Dr. Johnson are provided courtesy of the Center for the History of Family Medicine, American Academy of Family Physicians Foundation. The photograph of Dr. Johnson and Mr. Treadwell at the bedside was taken by photographer, Jim Kelly, and appeared in an article titled “Coming: More Nondoctors to do Doctor Works” that appeared in the May 15, 1967 issue of Medical Economics. For more information on Dr. Johnson and Mr. Treadwell see exhibit titled “a prototypical MD/PA practice.” (February 7, 2005) 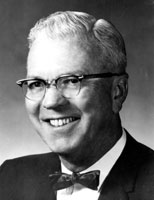 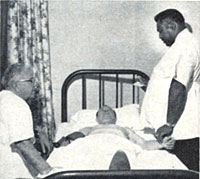