In 1970, Dr. Thomas E. Piemme (1932-2021) was appointed Professor of Medicine, and Director of the department’s Division of General Medicine at the George Washington University. The Division was charged with the management of outpatient clinic services and the emergency room. Determined to utilize the services of physician assistants, Dr. Piemme soon discovered that demand for this relatively new health provider far exceeded the numbers being graduated from the few existing training programs. He immediately began planning for the establishment of a PA program at George Washington University. This propelled him onto the national scene, and set the stage for his involvement in helping the American Academy of Physician Assistants (AAPA) and the Association of PA Programs (APAP) establish a joint office in Washington, DC and the development of a national certification process for physician assistants and the establishment of the National Commission on Certification of Physician Assistants (NCCPA) to oversee this process.

Dr. Piemme was born in Beaver, Pennsylvania in 1932. He attended both college and medical school at the University of Pittsburgh. He received post graduate training in internal medicine and cardiology, both at Pittsburgh and the Peter Bent Brigham Hospital in Boston. Following military service at the Aerospace Medical Research Laboratory at Wright Patterson Air Force Base in Dayton, Ohio, Piemme returned to Pittsburgh as Assistant Chief of Medicine where he taught until moving to Washington, D.C.

The Physician Assistant Program at the George Washington University accepted its inaugural class in 1972. It was during that year that Dr. Piemme was elected to be the second president of the Association of Physician Assistant Programs, succeeding it first president, Alfred M. Sadler, M.D. Piemme and Sadler worked closely together on several national activities that ultimately shaped the PA profession as it exists today. They made plans for the first “Annual Conference on New Health Practitioners” held in Wichita Falls, Texas. The conference filled the gap between prior conferences held at Duke University between 1968 and 1972 and the AAPA annual conferences that are held today.

While serving on the Board of Advisors of the Academy of Physician Assistants, Piemme arranged for the formal incorporation of both the Academy and the Association in the District of Columbia, and the recognition of both organizations as tax-exempt under the Internal Revenue Code. Piemme and Sadler went to New York and successfully appealed to three foundations for funding to establish a joint National Office in the District of Columbia. Funding having been secured, Dr. Piemme then worked closely with the two national organizations to recruit Donald W. Fisher, Ph.D. to serve as Executive Director of both the AAPA and the APAP.

During 1973, Dr. Piemme, then a member of the Goals and Priorities Committee of the National Board of Medical Examiners, persuaded the NBME to create a certifying examination for Physician Assistants-the first time in its history that the Board had become involved in examining persons other than physicians. Dr. Sadler, meanwhile, had been meeting, at the invitation of the American Medical Association, with a number of national medical organizations in an effort to create an independent “commission” to oversee the administration of any examination that might emerge.

In August of 1974, seventeen organizations, including the American Medical Association, the Association of American Medical Colleges, the Academy of Pediatrics, the College of Physicians, the College of Surgeons, the National Board of Medical Examiners, and the military services, among others, came together in Chicago to establish the National Commission for the Certification of Physician Assistants. Dr. Piemme was elected its first President. Soon thereafter, a search committee, chaired by Dr. Piemme, identified David L. Glazer as the first Executive Director of an Office in Atlanta, Georgia, with funding that Dr. Piemme had secured from the Robert Wood Johnson Foundation.

Dr. Piemme’s service to the National Commission continued for a number of years. He served as chair of its Standards Setting Committee, and its Recertification Committee in the late 1970s. Together with research staff from the NBME, he assisted in the development and field training of the Clinical Skills portion of the certifying examination, testing the ability of PAs to perform selected physical examinations. He served as chair of that Test Committee from 1977 through 2000.

Dr. Piemme retired from the University in 1998. In 2009, while residing in Phoenix, AZ, he was asked to serve as a Trustee of the Physician Assistant History Society. In 2011, together with his former colleague, Fred Sadler, he facilitated an affiliation of the Society as a support organization to the NCCPA. He served as President of the Society in 2012-2013. He coauthored with Alfred Sadler, Jr., Reginald Carter and Ruth Ballweg the “The Physician Assistant: An Illustrated History,” (2013) supported by the grants from the Josiah Macy Jr. Foundation and the Robert Wood Johnson Foundation. To learn more about Dr. Piemme and his significant contributions to the development of the PA Profession, watch his video Oral History.

Acknowledgments: This Biographical Sketch was prepared by Thomas E. Piemme, MD. The photographs of Dr. Piemme were provided courtesy of the Duke University Medical Center Archives and the Society for the Preservation of Physician Assistant History. This biography was last edited in April 2021. 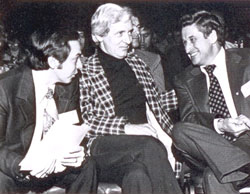