Clara Vanderbilt graduated from the Duke University Physician Assistant (PA) Program in 1971 and was immediately recruited by Drs. Marvin Gleidman and Richard Rosen to come to Montefiore Medical Center in the Bronx of New York City. As the country’s first surgical PA intern, Vanderbilt worked and studied along side her physician counterparts to prove that PAs could be used as house staff to reduce the number of residents being trained as a means of addressing a projected oversupply of surgeons in the 1990s. In doing so, she helped establish the country’s first postgraduate residencies in surgery at the Montefiore Medical Center, Albert Einstein College of Medicine (AECOM). She was associate director and later director of the PA surgical residency program at Montefiore Medical Center from 1978 until her retirement in 2000. She traveled throughout the country to help other institutions establish similar residency programs for physician assistants.

Women were not a mainstay of the PA profession in the early 1970s. At that time, PAs were mostly males with former military corpsmen experience. Because of her drive and dedication to the future of her chosen profession, Vanderbilt was elected to serve as a member of the Board of Directors (BOD) of the American Academy of Physician Assistants (AAPA) in 1972 and became the organization’s first female vice president in 1975. Since the AAPA was interested in establishing state chapters, she became a proponent and founding president of the New York State Society of Physician Assistants (NYSSPA). Within the AAPA, she advocated for inclusion of surgically trained PAs in the organization and the establishment of postgraduate residency programs for PAs in medical and surgical specialties. She lobbied the AAPA BOD to establish a “Surgical Council” to prove that the AAPA was interested not only in “generalist” PAs but “specialist” PAs as well. When the National Commission on the Certification of Physician Assistants (NCCPA) was formed in 1975, Vanderbilt was asked to serve as one of Academy’s first representatives to the Commission. She was reappointed to the NCCPA in 1981 and played a pivotal role in getting the Commission to develop and administer an optional surgical examination for PAs. She was elected president of the Association of Postgraduate Physician Assistant Programs (APPAP) in 1991.

Vanderbilt has served on numerous committees and councils of the AAPA, NYYSSPA and NCCPA. Her interest in bioethics and a code of ethics for PAs lead her to become a member of the Hasting Center Institute of Society, Ethics and Life Science and a member of Montefiore’s Ethics Discussion Group and their Bioethics Committee. Throughout her career, Vanderbilt has emphasized “patient centered” health care molded after the philosophy of Dr. Eugene A. Stead, Jr., former chairman of medicine at Duke University and one of the founders of the PA profession.

Vanderbilt was born in Hillsborough, NC where she attended high school. Her dad was an electrician. She was reared in a typical southern family with two sisters and a brother. She married before completing high school but took courses at Durham Technical Institution, Durham, NC to get her GED degree and additional science courses with the intent of becoming a licensed practical nurse (LPN). Because of family obligations, she dropped out of school and went to work as a nursing assistant at Dorothea Dix Mental Hospital in Raleigh, NC. After learning phlebotomy on the job, she went to work at the Veterans Administration Hospital in Durham, NC. Because of her desire to learn, she was made a technician in the hematology laboratory overseen by Dr. George Spooner. Spooner had been recruited recently by Dr. Robert Howard and Dr. E. Harvey Estes, Jr. to teach biochemistry to PAs students at Duke. Dr. Spooner encouraged Vanderbilt to become a physician assistant and recommended her to the PA program faculty. She enrolled in and graduated from the Duke PA program in 1971. While working at Montefiore, Vanderbilt obtained her BS degree in philosophy from the State University of New York (Empire State College) in 1982. At the time, she was a single parent rearing a son and two daughters, working full-time and actively involved in several professional organizations.

Because of her leadership and pivotal role in helping establish the AAPA and NYSSPA, she was awarded the AAPA presidential award in 1983 and the 20th anniversary award in 1988. She received the distinguished alumnus award from the Duke University PA Program in 1993 and the John W. Kirkland, MD award for professional excellence in 2000. The NYSSPA presidential award banquet was named in her honor in 2000. At the banquet, she was presented a plaque declaring her “the PA of the Millennium.”

After retiring from Montefiore, Vanderbilt returned to Durham, NC to be close to family and enjoy her grandchildren. She continues to give advice to those who call upon her and has served as a member of the Duke University PA Program’s alumni committee. 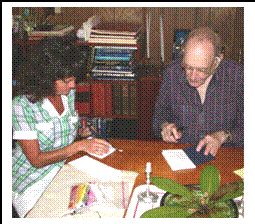 Clara Vanderbilt and Eugene Stead at his lake home, 2003